Lance Pugmire of the Los Angeles Times reported late Friday night via his Twitter account that former welterweight world champ, Victor Ortiz, will need to explain himself at a Nevada State Athletic Commission (NSAC) meeting for comments he made to a video reporter earlier this month. 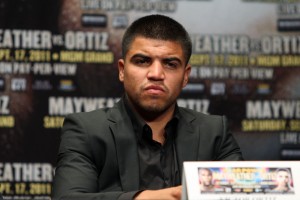 In the video, Ortiz acknowledged that he was trying to break Floyd Mayweather’s nose with an illegal headbutt in the fourth round of their September 17 bout.

According to commission executive director, Keith Kizer, Ortiz would likely be summoned to explain his statements at the January 11th NSAC meeting before a decision will be made on whether to license him for his February 11 bout against Andre Berto.