REGAN: What, fifty followers? Is it not well? What should you need of more?
Yea, or so many, since that both charge and danger/ Speak ‘gainst so great a number?

LEAR: Oh, reason not the need!

There’s something epic about Manny Pacquiao. Rags to riches stories are two-a-penny in the west, but few south-east Asians have quite taken the world by storm as completely as the little Pinoy. And it’s not just the fighting style of the current WBO welterweight champion that appeals – a winning smile, a genuine humility bordering on self-deprecation, and a quiet intelligence, mark Pacquiao out as someone most extra-ordinary. 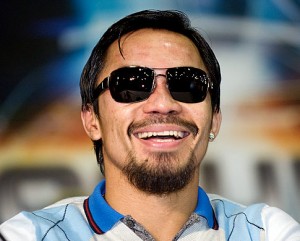 fighter on the planet. As his chief co-claimant Floyd Mayweather Jr. faltered at the twin altars of inactivity and indifference, Manny seemed to be bringing the fistic world to its knees – highly thought of adversaries like Ricky Hatton, Miguel Angel Cotto, Joshua Clottey and Antonio Margarito had not only failed to best the Philippine, but had been swatted aside like pesky flies.

So what’s changed? As we embrace 2012, Manny Pacquiao finds himself at something of a crossroads. 2011 has not been kind to him, at least between the ropes, and having turned thirty-three in December there’s sudden talk of decline and retirement.

Manny’s ring excursions in 2011 yielded two victories, but scant plaudits. In May he decisioned Shane Mosley in a sham of a contest that owed more to market forces than to any kind of sporting endeavour. Both Mosley and Pacquaio made an awful lot of money, as did their respective backers, but all at the expense of pay-per-view punters who financed a sorry spectacle in which both fighters effectively shouldered arms. The fight felt like thievery.

Then, in November, Pacquiao reprised his two encounters with Juan Manuel Marquez, and for a third time took a decision that few of the cognoscenti felt he deserved. The Philippine, by now the darling of Las Vegas, appeared to benefit from judging that seemed distinctly homespun. In the fight, he’d been befuddled by Marquez’s control of speed and distance, unable to fire off his usual quick-fire combinations, and even appeared at times to have surrendered control to the rock-hard Mexican. In fact the contest was closer than some alarmist observers have suggested, but pre-fight Manny had been predicted to give the ageing Marquez something of a beating and in failing to do so he seemed to be confirming suspicions that he’s on the slide.

But much has changed in the life of Manny Pacquiao in the last three years. I had the privilege of getting close to Pacquaio in the build-up to the Hatton fight back in 2008. Manny traveled to the UK to publicize the event, and over the course of a week or so he took part in pressers at the Imperial War Museum in London, and then at the Trafford Centre in Manchester, Hatton’s hometown. At the conclusion of the latter event, Hatton’s PA pressed a piece of paper into my hand, and whispered “Be here in about an hour”.

So it was, that an hour later I walked into The New Inn in Hythe, Manchester, the pub formerly owned by Hatton’s father, Ray, and the place where young Ricky honed his skills as a boy in the makeshift gym he’d constructed in the pub’s dingy basement. There were a small group of journalists, and the 24/7 crew, but the gathering was mostly made up of Ricky’s gym cronies and old-timers, easily recognisable by their facial scars and misshapen noses. Ricky turned up, and began practicing his darts on the pub’s well-used board, and soon after Manny walked in, flanked by Freddie Roach and a couple of hangers-on. Pacquaio was relaxed, confident, smiling, even if he must have felt like Daniel in the lion’s den. We British are genial hosts, but also know how to make chosen guests feel unwelcome, and the atmosphere in that tiny Manchester pub was cordial, but still charged. Pacquiao took it all in his stride, lost the darts match with Hatton (after all, it was Ricky’s board, and he must have played there a thousand times). Until that point, I’d felt that Hatton’s size and power would overwhelm Pacquiao in the fight, but the Pinoy’s courage and demeanour in The New Inn had me questioning that logic. I was able to interview Manny and found him to be disarmingly funny, intelligent, and fearless in his answers. There was little sign of the growing entourage that would later feature on 24/7.

It was after the Hatton fight that Pacquiao’s political ambitions began to take real shape. Sure, he’d sought election half-heartedly in 2007 and been defeated, but that was before the global attention thrust upon him by his victory over superstar Oscar De La Hoya in 2008, which changed Pacquaio’s life forever. He was elected as Congressman for the Sarangani province (his wife Jinkee’s hometown) in May 2010, and it’s inconceivable that this new realm of responsibility hasn’t impacted Pacquaio’s fistic preparations, and his lacklustre performances in 2011.

Can Manny be forgiven for beginning to believe his own publicity at the end of 2010? Can a fighter so widely lauded, and seemingly operating on a different plane to his opposition, be expected to maintain that level each time he laces on the gloves? Probably not, but there’s increasing evidence that the combination of ambition, fame, wealth and adulation is catching up quickly with the little genius.

There were worrying signs in the 24/7 footage preceding the Marquez fight: Manny’s entourage appears to have trebled in size since the De La Hoya and Hatton outings, with a number of hangers-on apparently on the payroll simply as cheerleaders. There was something unsettling in seeing Pacquiao offering a thousand dollars to two “employees” to beat each other up in the ring, and his dispatch of another to collect his $300,000 Ferrari (Pacquiao couldn’t bring himself to put down his video game to inspect the car when it arrived). Still more worrying was the sight of Pacquiao holding court with a guitar in his hand while two lackeys massaged his calves, one on each leg, while the champion murdered yet another tune (it’s about time someone whispered to Pacquiao that he’s as bad a singer as he is a great boxer). The footage also showed members of the entourage being tattooed with the team logo, as if they were being branded into service.

Before the Marquez fight there were plenty of Pacquiao cronies prepared to look into camera and expound on the Pinoy’s new-found motivation and desire in the face of his biggest challenge, and Pacquiao was seen to snarl and grimace through training as if he was giving it everything, but in the contest’s rear-view mirror there were clear signs that his preparation was being compromised. In unguarded moments Freddie Roach would moan about a lack of focus, and lapses of concentration were evident in the fight itself.

At the end of the year the Congressman invited further pressure when it was announced he’d purchased a $500,000 yacht, at a time when his constituents are living in poverty, beset by a range of social and environmental problems. Pacquiao named the vessel the “Sarangani Pride”, perhaps in an attempt to quell a groundswell of opinion at home that such a purchase was inappropriate, and defended himself by declaring it was a present for the wife and kids.

So, as 2012 arrives, Manny Pacquiao appears to have become separated a little from reality, and may find it difficult to recapture the kind of fighting intensity that saw him overwhelm the likes of De La Hoya, Hatton and Cotto. As momentum builds for the showdown with Floyd Mayweather, Pacquiao will need every ounce of dedication he can muster to compete on level terms with the American pound-for-pound claimant, when all the evidence suggests that, with the myriad of distractions surrounding him, he may just have left it too late.