The James Shuler Memorial Gym in West Philadelphia is a true throwback gym.  Sporting a concrete floor, several murals of past Shuler’s alumni, a ring, the essential bags, a few weights, and some treadmills, the place is for rugged, serious fighters. At any point from open to close you will find some of the best boxers in the city of Philadelphia, including Steve Cunningham, Yusaf Mack, Hank Lundy, and Dhafir 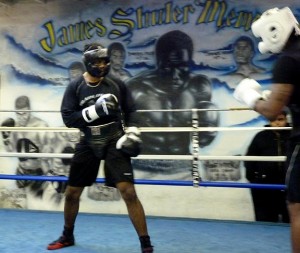 Smith to name a few.

But what the gym is most well-known for is their reputation for having the toughest, most uncompromising, most competitive, and best sparring around. Many fighters from everywhere in the tri-state area make the trek to Shuler’s to get good sparring for their upcoming fights.

This past Tuesday was no different, as heavyweight contender Eddie Chambers left his home gym for the day, to hit Shuler’s for eight rounds of action. I tagged along with Philly’s boxing scribe and historian John Disanto, of Philly Boxing History, to check out the sparring and talk with Chambers about his upcoming fight.

Chambers 36-2 (18 KO) bounced back from his knockout loss to Wladimir Klitschko in March of 2010 with a wide decision victory over Derric Rossy in February 2011. Chambers’ next bout is less than three weeks away when he takes on former WBO Heavyweight champ, Sergei Liakhovich in the main event from the Asylum Arena in Philadelphia. The bout opens Main Events’ new series that will air at least four times a year on NBC Sports Network. In addition, it marks Chambers’ first bout in his adopted hometown of Philadelphia since October of 2008.

The action for the day lived up to Shuler’s reputation as Chambers went four rounds with emerging Cruiserweight, Jaywon Woods and then took on Super Middleweight, Dhafir Smith for another four. Smith is known for being one of the toughest, most rugged fighters around. He upset Jeff Lacy and often is brought into camps for the top fighters to get them ready for upcoming bouts. Most recently, Smith was in camp as one of the main sparring partners for Andre Ward as he prepared for Carl Froch. 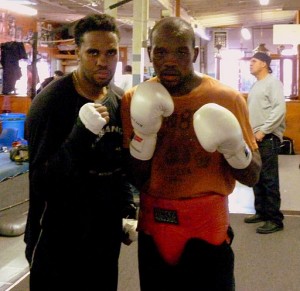 hed John and I saying, we need to start paying for the sparring at Schuler’s.  While Dhafir is joking, if asked for a ten dollar cover on the way in to watch I wouldn’t hesitate as the fighting is worth it. Often, what you see at Shuler’s is as fierce and competitive as a professional fight, except they have headgear and heavy gloves.

Smith, while at a size disadvantage against Chambers, can give hell to anyone in sparring and knows how to get fighters ready for upcoming bouts. Smith took pride in Andre Ward’s dominating performance over Carl Froch, stating that Ward would have gotten the knockout if he had not broken his hand (despite my chiding, Smith denies that Ward’s broken hand was a result of hitting Dhafir’s solid head).

Chambers came in shortly after we arrived and after some shadowboxing hit the ring for his sparring action. Chambers was impressive, showing why people call him “Fast Eddie.” He is a far cry from the heavyweight of several years ago that was weighing close to 220lbs. Chambers now sports a much leaner physique of around 205 lbs. He admits he may be small for the division, but knows this is his best fighting condition. The lighter frame results in a fighter that is faster on his feet who uses more lateral movement.

Chambers and Smith put on a show for those in the gym. Chambers often laid on the ropes, showing his colorful personality, hooting and taunting Dhafir. Smith got his as he always does, but often Chambers would use his deceptive upper body movement to slip shots and land his counters. On they went for four rounds with the action heating up in each stanza. Several rounds of heated action and fun bantering between friends in the ring provided a show for us writers and those training in the gym. When all was said and done, Chambers got the work he needed to continue preparing for a former champion and a homecoming on boxing’s return to NBC (well, NBC cable at least).


Question, comment, agree, disagree, or anything at all, send it to gboxing3@gmail.com