Amir Khan wants to be the kind of fighter boxing fans care about.  Before his fight with Lamont Peterson, Khan was throwing around the biggest names in the sport as more-than-just possible future opponents: Manny Pacquiao and Floyd Mayweather were in his crosshairs.

Since his majority decision loss to Peterson in December, though, Khan has taken aim at far lesser competition.

In a twitter tirade that would make internet conspiracy message board enthusiasts proud, the former 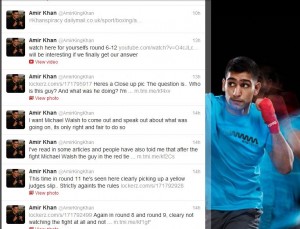 world titlist resorted to posting screenshots of an infamous “man in a black hat” sitting next to one of the fight’s officials.  Khan goes on to post picture after picture, and video after video, with comment after comment, calling out WBA supervisor Michael Welsh, as well as anyone else who could have possibly been involved in the so-called conspiracy to rob poor Khan of his title in order to give it to underappreciated American, Lamont Peterson.

If you haven’t seen it, essentially his tweets show a man moving around the front two rows behind and next to Welsh, and at one point midway through the fight he appears to reach in front of him.

Not that anyone should have to do this, but let me break down EXACTLY why conspiracy theories are just that: theories.  Silly and stupid theories, at that, propagated by misfortunate souls either with too much time on their hands, not enough sense, or both.

Lamont Peterson isn’t exactly a household name.  While he’s a really good fighter, he’s not exactly the type of star attraction anyone would go out of their way for to steal a victory.  Frankly, almost everyone who watched the fight between the two competitors thought Peterson would put up a good fight but come up a bit short.  And pretty much everyone was fine with that.  Moreover, if there are ever any shenanigans in scoring (and it does happen), it’s typically going to favor the cash cow fighter – the one that brings the moolah and prestige.  So basically, not Lamont Peterson.

Sure, Khan came to Peterson’s hometown for the contest but let’s not pretend HBO Boxing was putting on the show to highlight Peterson.  Khan was (and probably still is) the bell cow of the affair and everyone knows it.  If anything, the judges should be applauded for handing out a close decision win for the lesser known underdog in a fight that was by all accounts very difficult to score.

If you are on twitter, and follow other people besides Amir Khan, you’d know from your timeline that night that the scores of the fight were all over the place.  Some liked Khan because of the work he did on the outside.  Others liked Peterson’s aggression and determination.   Either way, the fight was close.  The scorecards were evenly split and rightfully so.  The fight was razor close and Amir Khan has nobody but himself to blame for the loss.

Why?  Because Amir Khan persisted in pushing Peterson off with his elbows which is quite clearly stated a violation of boxing rules.  Even amateur fighters know not to do that.  Not only that, but after the first point deduction, he continued to foul Peterson repeatedly with the move which inevitably led to yet another point deduction from the presiding referee.  How many points does one need to be deducted before he decides to change strategy?

Simply put, if there had to be a conspiracy to score a close fight closely, then boxing is in more trouble than we all already think.

What it boils down to is this: in a contest fight fans universally agree was a very, very close fight, Khan gave the victory away with his stupid fouls all on his own.  While one judge had Khan the winner at 115-110, the other two judges gave Peterson the nod with scores of 113-112 each.  Without the elbows, Khan wins the fight outright, and if he had just stopped with the nonsense after the first point deduction, he would have at least carried the draw.

So do us all a favor and shut-up, Amir Khan.  Stop pointing fingers and claiming foul.  Your tweets are starting to make Oscar De La Hoya seem stable.  This one is on you and you alone.  It was a good, close scrap that you gave away because you decided to channel you inner MMA nitwit and throw elbows in the ring instead of fight within the rules of the sport for which you claim to be a champion.

Own up to your defeat, ask for a rematch, and until you get one, just shut-up.