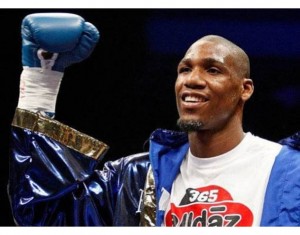 ESPN’s Dan Rafael is reporting that Paul “The Punisher” Williams (40-2, 27 KOs) will return to the ring to take on jr. middleweight contender, Nobuhira Ishida (24-6-2, 9 KOs). The pair will meet in a 12-round contest scheduled to headline the February 18 edition of Showtime Championship Boxing from the AmeriBank Center in Corpus Christi, Texas.

Williams, the former two-time welterweight titlist, has not fought since his controversial majority decision victory over Erislandy Lara in his comeback fight in July. Williams was knocked out by top middleweight, Sergio Martinez in November 2010.

Ishida has won two straight since losing a split decision to Rigoberto Alvarez in 2010, including a shocking first-round TKO victory over James Kirkland last April. In his last bout, the light-hitting Ishida knocked out Edson Espinoza, who was making his pro debut.

Cloud won the vacant IBF title in 2009, when he outpointed Clinton Woods over 12 rounds. His defenses have included decision wins over Glen Johnson and Fulgencio Zuniga, and a knockout victory over Yusaf Mack last June. Cloud was scheduled to defend his title against Zsolt Erdei on December 31, but a hand injury forced Erdei to withdraw on short notice. Campillo, who lost his title by way of controversial split decision to Beibut Shumenov in 2012, steps in for Erdei.