Kubrat “The Cobra” Pulev (14-0, 6KOs) will step in the ring to face Michael Sprott (36-17, 17KOs).  Pulev was originally scheduled to face Taras Bidenko (28-4, 12KOs), who was forced to  withdraw from the bout in early December/late January due to a cut he received during sparring.  With little more than a week’s notice, experienced British fighter Michael Sprott takes the fight.

With a decorated amateur career, Pulev comes into this bout undefeated but has yet to see solid 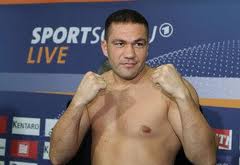 competition in the ring.  This fight will give fans a good indication of how he stacks up with a veteran fighter who has fought highly ranked opponents in the heavyweight division through the years.

Sprott has a less than stellar record, but he’s been in the ring with notable heavyweight contenders such as Alexander Dimitrenko (L UD 12), Lamon Brewster (L UD 8) and Ruslan Chagaev (L TKO 8).

The fight will be on the undercard of the main event that will co-feature super middleweight bouts with Arthur Abraham vs. Pablo Oscar Natalio Farias and Robert Stieglitz vs. Henry Weber.  All fights will take place at the Baden Arena in Offenburg, Germany on Saturday, January 14th.