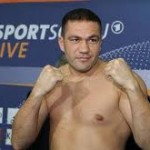 Kubrat “The Cobra” Pulev (14-0, 6KOs) will step in the ring to face Michael Sprott (36-17, 17KOs).  Pulev was originally scheduled to face Taras Bidenko (28-4, 12KOs), who was forced to  withdraw from the bout in early December/late January due to a cut he received during sparring.  With little more than a week’s notice, experienced British fighter Michael Sprott takes the … END_OF_DOCUMENT_TOKEN_TO_BE_REPLACED