With ESPN Friday Night Fights on a week’s hiatus for the Australian Open tennis tournament, Showtime gets the spotlight all to itself for a late-night tripleheader. Cuban sensation Guillermo Rigondeaux (8-0, 6 KOs), in just his ninth pro fight after a long amateur career, takes on WBA champ and Boxing Tribune 6th-ranked junior featherweight Rico Ramos (20-0, 11 KOs), who is looking to prove that he is not just a paper champion in his first defense of the title he took from 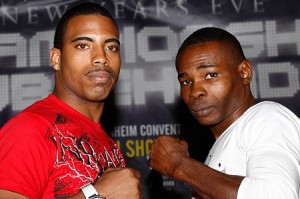 In the main event, Rigondeaux, despite his lack of pro experience, has to be the favorite here; Rico Ramos was way behind on all three judges’ scorecards before a one-punch spectacular knockout where he put a left hand perfectly on the chin of the champion Shimoda. Before that, Ramos’ signature win was a second-round knockout of veteran journeyman Heriberto Ruiz on ESPN in November of 2010. Ramos is still only 24 years old and may be rounding into form as a potential future opponent for Nonito Donaire at 122; whether he needs to look for a one-punch knockout again in this fight is largely going to depend on how he handles the best technically skilled boxer he has ever faced.

The Cuban, for his part, has two Olympic gold medals, two World Amateur Championships, and an absolutely dreadful win over Ricardo Cordoba in November of 2010 that led some to question his marketability and style as being less than TV-friendly. Rigondeaux appeared to take the lesson to heart in his most recent fight; against then-unbeaten Willie Casey, Rigondeaux brought the pain early and often, putting the Irishman down twice and finishing him in the very first round with a furious barrage that led referee Stanley Christodolou to put an end to the slaughter at 2:38. There were shades of the killer instinct in the Cuban fighter, and if Ramos is unable to handle Rigondeaux’s attack this could be a very short fight indeed.

It should be noted that Rigondeaux’s chin has been tested; a flash knockdown put him on the canvas in the sixth round of the Cordoba fight. Ramos has one-punch knockout power. That alone makes this a very intriguing fight and Ramos a very live underdog.

On the undercard, untested Guy Robb looks to prove that he is something other than a club fighter. With only one fight outside of California (a four-round decision win over sub-.500 fighter Noe Lopez Jr. on the off-air undercard of FNF in Reno last May), the Sacramento native continues to build his record. Robb has fought only one fighter who didn’t either have a losing record or was making his pro debut; he won a six-round unanimous decision over Pablo Armenta, who was 6-0-1 at the time of the fight. His three knockouts have all been against lesser competition and his power is questionable; his three knockout victims carried a combined 5-23-7 record into their fights with Robb, and one of the victims (Tyshawn Sherman) made his pro debut, got KO’d in the first round, and hasn’t fought since. Not exactly a murderer’s row of victims.

His opponent, Joel Diaz, has knocked out a motley array of who-dats and nobodies in compiling his 6-0 record; only one of his opponents (Esteban Nichol) had a winning record coming into the fight and Nichol was 3-1 at the time of the fight and is currently 3-4 with 3 knockout losses. Robb is a step up for Diaz; the results of this fight will determine who is the prospect. Whether either man is headed for bigger things in the sport is still way too early to determine, but it is interesting to see a swing fight given featured undercard status on national TV.

In the other ascended-swing-fight on the undercard, another guy with a penchant for knocking out tomato cans, Matthew Villanueva, looks to assert his authority over a fighter who is coming off not only his first test as a pro but also his first pro loss. Michael Ruiz Jr. has only one fight against a guy with a good record, his last fight against Jonathan Arellano (9-0-1 at the time of the fight), who beat Ruiz by wide unanimous decision and put the Fresno native on the floor in the fourth round of that fight. A suspect chin and a knockout puncher (even an untested one) may have predictable results Friday night; Villanueva has knocked out all six of his vanquished foes and his one draw was a technical draw under California rules due to an accidental low blow that ended that fight in the third round.

The fights air Friday, January 20th, on Showtime at 11 PM Eastern and Pacific; satellite TV viewers on the West Coast can watch live on the SHO-E feed (check your provider’s listings for availability) at 8 PM local time. The Boxing Tribune will have a full recap of the night’s televised action following the conclusion of the program.

Fox Doucette covers Friday Night Fights for The Boxing Tribune. His weekly column, The Southpaw, appears on Thursdays. He knows all about MacGyver-jury-rigging live fight coverage living on the US West Coast. Fan mail, hate mail, and WD-40 and duct tape can be sent to beatcap@gmail.com.