On the first NBC Sports Fight Night card, Bryant Jennings fought his way to a unanimous decision over fellow undefeated heavyweight prospect Maurice Byarm.  The two young prospects engaged in back and forth heavyweight action from the Asylum Arena in South Philadelphia to headline the show.

The top billing on the card was thrown together less than a week ago when the original main event fell apart at the last minute.  The opening of the fight night card was supposed to be a battle of proven top heavyweight contenders Eddie Chambers and Sergei Liakhovich, giving the live fans and TV audience a chance to see a former champion and former title challenger.  But when Eddie Chambers announced that he could not fight due to broken ribs, it was too late to find a suitable replacement for former WBO champ, Sergei Liakhovich.  So Main Events Promotions and matchmaker Russell Peltz went on the hunt for a last minute plan to save the show. 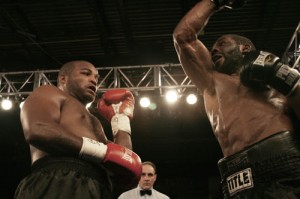 In stepped two young, untested-but-hungry prospects eager to seize the chance to gain the spotlight.  Jennings and Byarm jumped at the opportunity to be featured on live TV despite that fact they would be risking their undefeated records early in their careers.

After a calm first round, Jennings went on the offensive in round two.  Byarm was the aggressor moving forward, stalking his faster and more agile foe, but Jennings got the better of the action by exploding from a distance to land hard one-two combinations that got the crowd’s attention.  Throughout the early parts of the fight Byarm stalked, but Jennings kept control by using his jab and fighting on his terms.

Jennings, who was giving up twenty four pounds, often seemed to be the bigger and stronger fighter.  Jennings is heavily muscled and used his strength to bully Byarm inside.

“He was surprised because I know my ability, I know my strength.  He weighs twenty four more pounds than me but I was much bigger, much stronger person.  He was a southpaw.  That didn’t play no part at all.  I was not feared at all by a left hand that was coming from the opposite position.”

But by the mid-way point Byarm began letting his hands go and eased into the fight.  Byarm began pushing Jennings to the ropes where he could land his shorter punches and begin piling up rounds.

Down the stretch the two young fighters went back and forth with momentum swinging on a dime.  Each time one man landed a flurry the other responded with their own punches.  The later rounds were tough to score and many on press row had varying scorecards.  The Boxing Tribune had the final tally a draw at 95-95.

Going into the last round it appeared to be up for grabs and Jennings seized the fight by being far busier and more accurate in an exciting tenth round.  Jennings’ wide heavy shots had an impact and landed with authority when he had Byarm pushed against the ropes.

Both fighters should be commended for having the guts to take a risk and put their undefeated records on the line for a shot at gaining exposure and experience.  In a day and age of boxing where the undefeated record is so valued, neither fighter hesitated to jump at this opportunity.  Several other fighters turned down the fight for that reason, but Jennings and Byarm relished the chance to compete on a televised headliner and test themselves against solid opposition, even though neither had ever gone past six rounds thus far.

In the end it was Jennings who did enough to win, gaining the PA State Heavyweight title and far more exposure than if he had simply followed the typical route of taking on lesser opposition.

“That was a test and I passed with flying colors.  I give myself an A-.”

One week ago Jennings was preparing for a non-televised fight a month away.  Now he finds himself with his first belt around his waist and the pride that comes with a headlining TV victory.  It was the reason he jumped at the chance to be in this fight and he showed that his confidence has paid off.

“This week was a dream.  It was a dream and it was a nightmare at the same time because going into preparation your about to go in there and your about to do this.  This is not like a walkover ten round fight.  This is against two undefeated heavyweights.  I gave it a lot.”

Trainer Fred Jenkins stated he was happy with his fighter’s performance and felt this will teach him what he still has to learn going forward.

Experience, a State title, and getting a win on national TV.  Not a bad night when you thought you would be a spectator seven days ago. 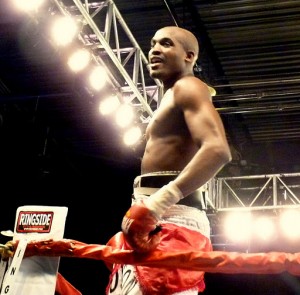 In the final bout before the TV coverage, Philadelphia’s “The New” Ray Robinson passed a tough test by scoring a unanimous decision with scores of 79-73 and 78-74 twice in the welterweight eight rounder.  Robinson (13-2, 5 KOs) had to deal with the tough and stubborn Doel Carrasquillo all night, but showed he had the superior skill to handle the challenge.

Carraquillo can easily be considered an easy opponent with a look at his record which is now (16-19-1, 14 KOs) but anyone that has seen him fight knows he is never an easy out.  Carraquillo moves forward with relentless pressure and absorbs his opponent’s punches with his iron head while laughing to show that he is not fazed by anything that is thrown at him.  Those who cannot handle the pressure become victims, and Carrasquillo is known for taking out young talented fighters.

Robinson though, was up to the challenge as he employed a circling boxing clinic designed to hit and get out of harm’s way before the slower Carrasquillo could get off.  Carrasquillo had a few moments where he trapped Robinson in the corner and landed hard shots, including a thudding bomb late in the final round.  But otherwise, Robinson was too slick for his plodding opponent and was able to take the tough moments to dominate the majority of the action.  Robinson landed punches at will, especially a sneaky left uppercut from the southpaw stance that carried him to the wide victory.

Robinson, who usually is not fighting moving backward, chose to employ the strategy for this fight considering Carrasquillo’s style.  Robinson was asked after the fight about Carrasquillo’s strength,

“Strength don’t matter if he can’t hit what he can’t see.”

Robinson had been on a fast track but then lost consecutive fights to Brad Solomon in 2009 and Shawn Porter in 2010.  He sat out for over a year and then returned as part of the new BAM Boxing Promotions earlier this year to easily knock out trial horse Manuel Guzman.  Now with a win over a tough veteran, Robinson seems poised to move forward to bigger things.

In the second televised bout, Sullivan Barrera of Cuba, who now resides in Miami, FL, easily took a unanimous decision over Damar Singleton of Toledo, OH.  Barrera won by scores of 60-54 twice, and somehow one judge found a round to give to Singleton scoring the bout 59-55.  Barrera easily had his way in what was a slow paced one-sided fight.  The bout was in the light heavyweight division.  Barrera moves to (9-0, 6 KOs) and Singleton drops a bout for the first time to (6-1, 4 KOs).

Jose Peralta won a one-sided six round welterweight fight over Lenwood Dozier by scores of 60-54 on all three cards.  Peralta was extremely active, firing off combinations with an aggressive come forward style.  Dozier did a decent job on defense slipping shots and absorbing heavy blows but never mounted any kind of offense to get into the fight.  Peralta of Jersey City, NJ goes to (7-1, 4 KOs) while Dozier of Glen Burnie, MD falls to (7-4-1, 3 KOs).

In the opening bout Naim Nelson turned in his best performance as a pro, taking the unanimous decision over Pedro Andres (0-1) by scores of 40-36 on all three cards.  Nelson forced the action, backing Andres up with hard straight rights and left hooks.  Nelson, of Philadelphia, stunned Andres, of Bridgeton, NJ, several times but was not able to finish it.  Still, an impressive performance from Nelson who seems to get better each time in the ring.  The four-rounder was in the junior welterweight division.