Bodega del Boxeo, Ensenada, Mexico – Former WBO featherweight titlist Daniel Ponce De Leon (42-4, 35 KOs) overcame a flash knockdown in the second round to score a sixth-round KO victory over Omar Estrella on Saturday night. De Leon worked behind his jab at times, pounding Estrella with left hands throughout the bout. Estrella looked ready to go as early as the fifth round, and would eventually succumb to a sustained flurry from De Leon in the sixth. 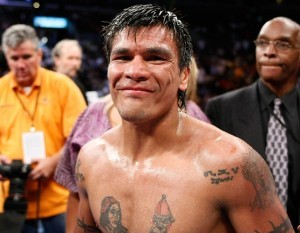 On the undercard, Leo Santa Cruz (19-0-1, 11 KOs) stopped journeyman Alejandro Hernandez (24-9-2, 13 KOs) in the fourth of ten scheduled rounds. After absorbing punishment from Santa Cruz in the second and third rounds, Hernandez elected not to come out for the fourth round. An arm injury may have been the cause of Hernandez’s submission.

From the Coliseo Olimpico de la Universidad de Guadalajara in Guadalajara, Jalisco, Mexico – IBF lightweight champion Miguel Vazquez (30-3, 13 KOs) retained his title with a near-shutout win over top contender, Ameth Diaz (30-11, 21 KOs). Vazquez put Diaz on the canvas once in the fight, and was able to outbox a wild-swinging Diaz and take the bout with scores of 120-107, 119-108, and 119-108.