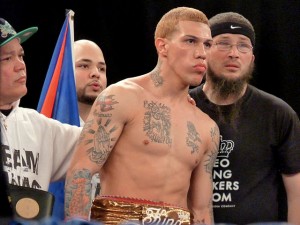 middleweight co-feature of Main Events inaugural NBC Sports Fight Night show.  The fight took place at the Asylum Arena in South Philadelphia in front of a packed house.  Rosado used his size and skills to abuse his opponent, becoming the first to stop Soto-Karass, and announce himself to the boxing public on national TV.

Rosado wasted no time getting started in the first round.  Employing a controlled aggression, he marched forward landing numerous overhand rights to the head and left hooks to the body.

“I hurt him with, he threw a jab, and I came over the top with an overhand right.  I told Billie [trainer Billy Briscoe] I was going to get him with that.  A lot of things I was catching and coming back with the hook, the hook was landing beautiful.”

In round two Soto-Karass seemed to get into the fight but it was still Rosado’s round.  In round three Rosado went back on the attack and never gave an ounce of momentum back.  Landing hard shots to the head and body punctuated by opening a cut over Soto-Karass’s left eye, Rosado took complete control of the action.

The dominance continued in round four with Rosado constantly moving forward to push Soto-Karass out of his normal aggressive style and forcing him into a defensive retreat.  By the end of the round Soto-Karass had been stunned several times, the left side of his face was swollen and bruised, and he looked ready to go.  Rosado had thoroughly dominated every second of the round and was on his way to backing up his words with actions.

Throughout round four, Rosado’s attack had the crowd in a frenzy often chanting “Gabby-Gabby” to cheer on the hometown favorite.  Considering Bernard Hopkins can’t actually fight forever, Rosado wants to add his name to the list, along with Mike Jones and Danny Garcia, as the man to take over the face of Philadelphia boxing.

“You heard that crowd.  I just wanted to show that Philadelphia appreciates the underdog.  They like that.  The crowd was behind me and I love it man.  I just wanted to give the fans that performance.  I know that fans don’t want to see a guy running around and throwing pitter patter shots.  They want to see hard shots. They want to see action.  That’s what I want to give them.  I’m just glad that Philly is backing me up.  Like I said, when Bernard hangs it up, I’m gonna carry that torch, I’m running with it.”

Action and hard punches were what the crowd got.  Prior to round five Soto-Karass’s corner spilled a bucket of ice in the corner, in what clearly seemed like an attempt to buy their man time.  The strategy was not going to be enough.  Rosado came out with a fury for round five, landing at will with Soto-Karass nearly out on his feet.  Then at 2:06 of round five, with Rosado pounding away in the corner, referee Steve Smoger jumped in to halt the action, making Rosado the first to stop Soto-Karass.  He succeeded where others, including fellow Philadelphia contender Mike Jones, failed in beating Soto-Karass inside the distance.

“He’s never been backed up.  You see when I was on my toes he was comfortable.  When I started throwing my shots, he couldn’t do nothing about it.  I knew I could back this guy up.  That was my game plan going in.  I was gonna back this guy up and get him out of his comfort zone.”

“I felt so comfortable today.  Nothing fazed me.  This guy put pressure, it didn’t bother me, and I knew this guy was going to be like that.  I was just comfortable, I was relaxed.  I never felt that comfortable in a fight.  It was just like total control.  It’s that experience kicking in.”

To his credit, Soto-Karass (24-7-3, 16 KOs) was brave and tough as always.  But bravery was not going to get in Rosado’s way, he was determined to show he was ready to announce himself to a national audience and put on what was certainly his best performance so far.

“This performance, everything that we been through, it paid off today.  Today I think I showed I’m a new and improved fighter.  I’m a different animal than what I used to do.  I was so anxious, looking forward to showing that to people.  I wanted to make that statement that this guy’s a different animal.”

Rosado (19-5, 11 KOs) has been through his ups and downs, winning fights as the underdog and losing some he could have won.  But the experience from taking tough fights and going the hard road has paid off, as he has matured into a more complete fighter with confidence and a wide skill set.

“I’m at a point where I’m in my zone.  Angulo, I wasn’t ready for a guy like Angulo.  Me, the attitude I have is bring whoever, King Kong, whoever.  But, now with the experience I know.  I’m in total control.  I have my ring identity. I didn’t know if I should box, I should put pressure, I was trying to figure it out, what was my identity.  Now I know what I can do, what I’m capable of.  I’m comfortable now and I think that makes a big difference in my fight game right now.”

“A lot of his shots that landed, I was grazing them, Bernard does that.  A lot of the things I was doing was old school.  I was catching them.  Everything was on the inside, with my counters I was making him pay.”

Now Rosado wants to keep his momentum and get his shot against the best.  The fighter who says he would take on King Kong wants to make the most of 2012 and had a particular 154 title holder in his sights.

“I feel great, man, I feel like I want that shot.  2012 is the year; I wanted to make a statement here.  Steve Smoger just told me that I would have beat anybody that day.  That’s my determination, my hunger, my new attitude this year.”

“I’m telling you I’m ready for whoever.  That’s that statement I wanted to make today.  Whoever it is, Canelo, I will fight Canelo.  I will fight whoever, man.  That’s my attitude and I’m confident in my ability.”