Miguel Cotto has spent that last two years as the forgotten man at Top Rank; the Sherman Williams to Manny Pacquiao’s Emmitt Smith. Since he re-signed with Top Rank in June of 2009, Cotto has been sent to slaughter, handcuffed and weight drained, against Manny Pacquiao. He’s been offered up as opponents to rising stars, Julio Cesar Chavez Jr. and Vanes Martirosyan, and he was sent out in a rematch against the vile slug who took his soul, Tijuana’s Antonio Margarito. 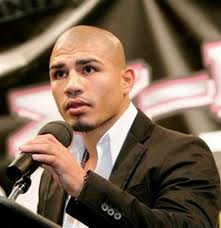 Cotto has been treated as a red-headed step-child since Pacquiao destroyed Oscar De La Hoya and sent him off into retirement in 2008, signaling his arrival as a superstar and Top Rank’s top earner. Admirably, Cotto hasn’t made a big deal out of it. He’s been the perfect company man and consummate professional since he turned pro in 2001. He didn’t complain when was pressured to re-sign with Top Rank in order to get the biggest pay day of his career against Manny Pacquiao in 2009. He didn’t complain when he was forced to offer up his WBO welterweight title in a catchweight bout with Manny Pacquiao in 2009. And when he attempted to force Margarito down to a potentially-debilitating catchweight in their December rematch, only to have Bob Arum turn his back when it came time to pressure Margarito into accepting the stipulation, he quietly went about business as usual.

I wouldn’t blame Cotto if he waged his own personal cold war against Bob Arum’s stable of fighters, refusing to lend his profitable name to the furthering and enriching of Bob Arum’s boys. At the same time, I wouldn’t blame him for settling back into his old habits.

As arguably the third most bankable star in boxing, Cotto finds himself in a unique and highly-profitable position in the coming week. As Floyd Mayweather and Manny Pacquiao – the sport’s two biggest stars – wage a public relations war in their battle to prove “who’s ducking who”, Cotto sits back and waits for the best offer to secure his services for May 5 or June 9.

Cotto would be faced with a tall task against either man, and aside from the obvious money offered to him, several pros and cons should factor into his decision.

With Pacquiao, it is reported that another contract extension with Top Rank would be involved. From the point of view of Arum and Top Rank, it is the smart move. If Cotto beats Pacquiao, Top Rank will have a stake in the man who beat the man. With Mayweather and his de facto promoter, Golden Boy Promotions, an exclusive deal is not expected to be a part of a Mayweather fight. With Top Rank, Cotto has Julio Cesar Chavez Jr. and Vanes Martirosyan to look forward to. If a Golden Boy-Mayweather-Cotto joint venture if successful, expect Golden Boy to pressure Cotto into selling his services again. Think of the possibility of renewing the long-standing Puerto Rico-Mexico rivalry against one of Golden Boy’s young Mexican jr. middleweight stars, Saul Alvarez or Alfredo Angulo in his native Puerto Rico.

In either case, Top Rank and Golden Boy would have a short-term plan for Cotto. Locking into exclusive deals with either promotional outfit would set him on that path. In the end, I’m rooting for Cotto to remain a free agent, negotiating on a fight-by-fight basis as he rides off into the sunset on his own terms.

Speaking of the Mayweather-Pacquiao “negotiations”, we’re witnessing the biggest dick-measuring contest the sport has seen in decades. The latest developments have Arum floating the possibility of requesting a further extension on Mayweather’s prison term in order to make the fight in late May-early June, Mayweather claiming May 5 is the only possibility, Pacquiao backpedaling from his December offer to take a smaller percentage of the purse to make the fight, and Mayweather rejecting Pacquiao’s offer to make the fight at a 50-50 purse split over a personal phone call to the Pinoy superstar. It’s safe to say that Mayweather vs. Pacquiao won’t happen on May 5, and Mayweather won’t go before Judge Melissa Saragosa and ask for a second extension on his sentence to fight Pacquiao on June 9.

It wouldn’t surprise me at all if we didn’t get news of an opponent for either man this week. It essentially puts the first to blink in the down position in their war to prove “who’s ducking who”. Expect plenty of Mayweather-Pacquiao rumors this week, and hold onto your sanity until Cotto makes his choice and puts an end to what will prove to be an insufferable love triangle.