Juan Carlos Salgado (24-1-1, 16 KOs) will put his IBF jr. lightweight crown on the line against top-rated Martin Honorio (32-6-1, 16 KOs) in April, according to numerous sources. A venue has yet to be determined. 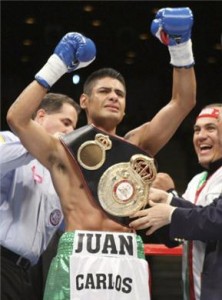 Salgado is a two-time world titlist, having first won gold with a shocking first-round KO victory over a heavily-favored Jorge Linares in 2009. He lost his title to Takashi Uchiyama in his first defense, and after two confidence-building fights against Mexican journeyman Guadalupe Rosales, Salgado defeated Argenis Mendez to claim the vacant IBF crown. His first title defense, an optional defense against Miguel Beltran Jr. in December, ended in the second round on an accidental head butt.

Honorio is making his second challenge for a world title, having lost his first bid for a world title to Robert Guerrero in 2007. Honorio defeated Fahsai Sakkreerin in a title elimination bout in December, grabbing the IBF’s number one spot in the process.