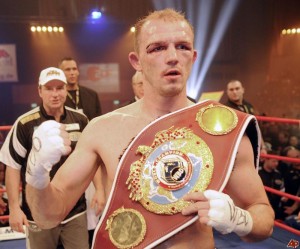 Braehmer, former WBO Light Heavyweight champ, has four TKO victories in his last five fights (the other a UD win) but hasn’t fought in two years.  Since his last fight in April 2010, he’s pulled out of several fights, two of those against Nathan Cleverly–the end result of which was him being stripped of his title by the WBO.  Additionally, he’s stayed busy outside the ring with legal troubles, but those are said to be out of the way as he comes into this bout.

Guerrero holds a three inch height advantage over the German southpaw and has been in the ring three times in the past two years.  Unfortunately, his record shows that he’s rarely been up against skill or experience in the ring, with twenty-four of his thirty-two bouts coming against fighters with ten or less victories on record.

Universum’s fight card will feature eleven bouts, including Ruslan Chagaev vs. Kertson Manswell and Denis Boytsov vs. Darnell Wilson, both in the heavyweight division.