Two southpaws will meet in the ring Saturday, January 28th in an IBF junior middleweight elimination bout.  Cory “Next Generation” Spinks (38-6, 11KOs) will face Sechew “Iron Horse” Powell (26-3, 15KOs) to decide who will be next to face the 4th ranked junior middleweight in the world and IBF titleholder, Cornelius Bundrage (31-4, 18KOs). 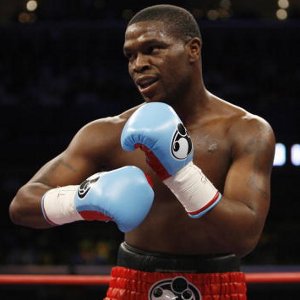 Spinks went on to successfully defend his three titles with UD wins over Zab Judah in April 2004 and Miguel Angel Gonzalez in September 2004.

On February 5, 2005, in his hometown of St. Louis, Missouri, Spinks lost his three world titles in a rematch with Zab Judah.  Midway through round nine, Judah sent Spinks to the canvas.  Spinks beat the count, only to have Judah rush in with a barrage of punches, backing him into the ropes.  A right-left combination sent Spinks sprawling against the ropes and the official halted the bout with eleven seconds to go.  Spinks suffered the first stoppage loss of his career.

Since that loss, Spinks has gone 4-3 and become the IBF light middleweight champion two separate times with wins over Roman Karmazin and Deandre Latimore.  The three losses come against Jermain Taylor, Verno Phillips and Cornelius Bundrage.

With the win over Latimore, Powell earned his shot at a title.  On June 25, 2011, Powell fought the IBF junior middleweight champ, Cornelius Bundrage.  The bout went the distance, resulting in a unanimous decision loss for Powell with scores of 109-119, 111-117 and 113-115.

The bout on Saturday, gives a former titleholder a chance to shine in the limelight once again, and a hard-working prospect the opportunity to hold a world title for the first time.

The fight will be amongst five scheduled matches and will take place at the Shrine Mosque in Springfield, Missouri.  Headlining the bout will be a cruiserweight match-up between BJ Flores and Hugo Pineda.