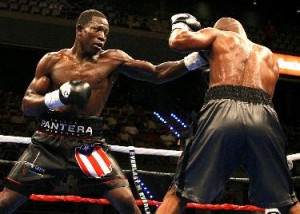 This week’s main event comes as a bit of a disappointment, since Miranda was supposed to be in against Yordanis Despaigne (9-2, 4 KOs) in an effort to avenge a disqualification loss handed out by referee Vic “Count” Drakulich on FNF last summer. Drakulich’s officiating performance deprived fans of a great fight and essentially deprived Miranda of any kind of meaningful body attack after the quick-hook point deductions (with no prior warning) in the second and third rounds of that contest. It would have been a great fight for the fans, but Despaigne pulled out (some would say punked out) claiming he was “not mentally ready” for a fight with a guy he supposedly beat. Despaigne, of course, was last seen getting exposed as a non-entity in the pro ranks in his last fight, a six-round unanimous decision beatdown against Cornelius White (which on one judge’s card included a 10-8 round without a knockdown) on the undercard of the Andre Ward-Carl Froch Super Six final.

Instead of the rematch, Miranda gets a real threat in Chilemba, who currently occupies the #16 spot at light heavyweight in The Boxing Tribune’s rankings and gave Thomas Oosthuizen all he could handle in a 12-round draw for a minor version of the super middleweight title in 2010. Chilemba is best known to ESPN’s fanbase as a guy who won a close, and somewhat controversial, unanimous decision over then-unbeaten Maxim Vlasov in a fight where Vlasov twice put the South African on the floor in the eighth round. Chilemba is unbeaten in his last eleven fights and avenged his lone loss, which came against journeyman Willbeforce Shihepo by six-round decision in 2007.

Edison Miranda has never been in a boring fight in his life, and Isaac Chilemba has a very questionable chin and a still-unproven record (besides the Oosthuizen fight, Chilemba has never been in with a real title contender, while Miranda has been in with guys like Lucian Bute, Kelly Pavlik, Arthur Abraham, and Andre Ward–sure, he lost to all four of them, but he’s fought much better competition). This should be fun.

Meanwhile, the co-feature gives us one guy who couldn’t knock your columnist out (Williams) and another guy (Barthelemy) who should probably be kept out of the Italian food aisle in the supermarket for fear that he would mistake the tomato cans for his past opponents and start throwing punches. To say these guys are short on power is to say that New Orleans was “short on power” when Hurricane Katrina hit it. Williams couldn’t even knock out the hobos and in his lone TV appearance cured insomnia in an eight-round tilt with Marcos Herrera on FNF last April 29.

What this means in practical terms is that we will see a guy in Williams who prefers to box on the outside and not have his lack of power exposed against a guy in Barthelemy who has counter-punching in his blood and will not want to be a pressure fighter. Cover your eyes and remind yourself that the main event will be a cracker.

Friday Night Fights airs on ESPN2 and online at ESPN3.com at a special time; the fights are on at 10 PM Eastern/7 PM Pacific from the Texas Station Casino in Las Vegas, Nevada. The Boxing Tribune’s own Fox Doucette will be providing live commentary and scoring at the ESPN Friday Night Fights Facebook page and will have a full recap of the night’s televised action right here at your authority on Your Boxing Authority.

Fox Doucette covers Friday Night Fights for The Boxing Tribune. His weekly column, The Southpaw, appears on Thursdays. Fan mail, hate mail, and offers to fight Hylon Williams Jr. and prove he could go the distance can be sent to beatcap@gmail.com. And so what about the 40-pound weight advantage?