This Saturday from the Tropicana Casino in Atlantic City, Dee Lee Promotions looks to put on a night of action fights with a card titled “Superbrawl 1.”  The event features several fighters local to the Philadelphia and New Jersey area with nine total bouts, several of which look to be can’t-miss action fights. 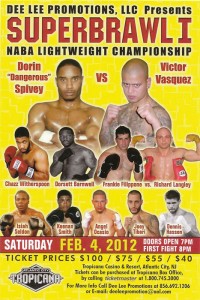 Headlining the card is a ten round lightweight bout between Victor Vasquez (14-5-1, 7 KOs) and Dorin Spivey (40-6, 29 KOs) for the vacant NABA title.  The Philadelphia native Vasquez has built a large following in the area due to always delivering non-stop action in every fight.  Ask any boxing writer who has covered Vasquez and they will tell you he has never been in a bad fight.  This comes from his penchant for being a relentless pressure fighter who works the body, throws tons of punches, and has a clear love for getting into a fight.

Vasquez will face probably the toughest challenge of his young career in the veteran Spivey.  Vasquez overcame a difficult fight in his last outing with a decision victory over former prospect Angel Rios, 9-5 at the time, in a tough action packed bout, but he will be facing a far more experienced foe this time out.

Spivey, from Portsmouth, VA has forty-six professional fights under his belt and has taken on solid opposition.  In addition he will likely be the bigger man as he has fought as high as 147lbs.  His most notable loss is to welterweight contender Antonin Decarie by unanimous decision in 2009, and he has only been stopped once, back in 2000 to Juan Lazcano.  Spivey was the first to defeat former Contender show participant Michael Stewart, and defeated the previously mentioned Angel Rios.

The limited film on Spivey shows he is a solid counterpuncher who can fight going backwards and is willing to mix it up when his opponent attacks.  This should blend well with Vasquez’s pressure style to make for an action fight for however long it lasts.

The co-feature is an eight-round heavyweight battle between Philadelphia’s Chazz Witherspoon 29-2 (21 KO) and Nicaraguan Evans Quinn 20-6-1 (18 KO), who now resides in Miami, Fl.  Witherspoon, who is known as “The Gentleman” for his incredibly polite nature, has a wealth of talent and a very good amateur background including being an alternate on the 2004 Olympic team.  He will be looking to perform in front of a home crowd that will include those from his alma mater, Saint Joseph’s University.  Witherspoon attended SJU on an academic scholarship and graduated in 2005 with a degree in Pharmaceutical Marketing.

Witherspoon’s two losses came to top competition.  He lost to Chris Arreloa in 2008 by third round DQ after he was floored and his corner entered the ring before the end of the round.  He was also stopped by Tony Thompson by ninth round TKO in 2009.  Witherspoon has won three in a row since the loss to Thompson including in his last outing, when he stopped Ty Cobb in the third round.

Quinn is an experienced veteran but has been beaten in his biggest fights.  He was stopped by Sergei Liakhovich in 2010 by ninth round knockout and in his last fight was stopped by rising contender Seth Mitchell in the first round in May of 2011.  Still, Quinn should provide a decent test for Witherspoon and give everyone an idea what Witherspoon has in the tank at this point in his career.

Also appearing on the card is Delaware native and popular local fighter Joey Tiberi 6-1 (5 KO) who takes on takes on Steve Cox 2-3 (1 KO) in a six round lightweight bout.  The card is rounded out with another six-rounder and five four-round bouts.