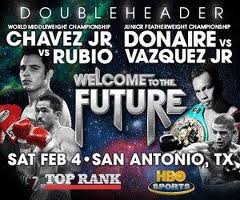 As of late, Chavez Jr. has been under heavy fire for riding his father’s coattails as his management continues to very slowly bring him up the ranks.  He gained the WBC middleweight title belt in June 2011 with a majority decision over Sebastian Zbik, who received the belt after it was stripped from Sergio Martinez in January 2011 when HBO did not approve his bout with the mandatory challenger.

Despite being heavily criticized, Chavez Jr. continues to attract media and fans alike—everyone is eager to see him make his second title defense this Saturday.  He comes into this bout undefeated and ranked third in the world among middleweights (Sergio Martinez and Felix Sturm being first and second, respectively).  His first title defense came against Peter Manfredo Jr. in November 2011.  Fans saw a Chavez Jr. that used skill and his lanky frame to control the bout against an always exciting and game Manfredo Jr.  The bout was called in the fifth round, when the referee determined that Manfredo Jr. could no longer withstand the barrage of punishment he was taking (read here for a recap of the event).

Rubio, a fellow Mexican fighter, comes into this fight with more losses but also a bit more experience.  He has gone 10-0 since October 2009 with nine of those wins coming by TKO.  His last loss was against Kelly Pavlik in February 2009.  He fought valiantly for nine rounds, but was unable to withstand the stronger and more accurate Pavlik and his corner stopped the fight before the start of the tenth round.

On paper, one could say that these fighters are evenly matched.  They’ve both been in the ring against weak competition with notable opponents few and far between.  Fight fans are hopeful to see one of these prospects pull away from the competition with a dominant performance on Saturday.

In addition to the doubleheader, the fight card will also feature seven bouts on the undercard including Vanes Martirosyan (31-0, 19KOs) vs. Troy Lowry (28-11, 17KOs) in the junior middleweight division and Wale Omitoso (20-0, 17KOs) vs. Nestor Ramos (2-1, 1KO) in the welterweight division.  All fights will take place in San Antonio, Texas at the Alamodome with doors opening at 6:30pm central.