How fitting that your friendly neighborhood commentator gets to run this on Groundhog Day. Bill Murray, Andie MacDowell, and Chris Elliott couldn’t come up with a better analogy for the week’s boxing news if they tried. You’ve got a fighter pulling out of a rematch against a guy he lost to, citing a mysterious injury. You’ve got a guy ducking a rematch with a guy he shouldn’t have beaten, citing “not mentally ready” (as close to an outright admission of fear as it gets). You’ve got a guy and his promoter playing the pay-per-click media for fools to duck the fight everyone wants to see. And you’ve got an allegedly undisputed champion refusing to fight the guy who can legitimately dispute that title. All you need is some hot oil to fry in and a Coke and you’ve got a meal fit for John Belushi. 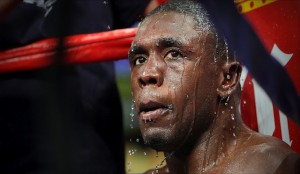 First off, we have Andre Berto pulling out of his rematch with Victor Ortiz. There’s really nothing mysterious about Andre Berto’s injury from a strictly medical point of view. He tore the biceps muscle (fun fact: there is no such thing as a “bicep”, the word biceps is not plural and refers to a single muscle) in his left arm, which is rather important to have at full function in the sport of boxing (or indeed much of anything else in life).

The problem is what a torn biceps implies. Victor Conte has been working with Berto, and considering that in his first fight with Conte on his team the Haitian beat Jan Zaveck in the sort of truly brutal fashion not seen since the first Cotto-Margarito fight, one has to ask questions. Furthermore, loss of muscle resilience and a tendency toward muscle-related injuries (rather than joint-related such as torn ligaments or strained tendons) is a common side effect of steroid use seen especially in baseball during the so-called “Steroids Era.” Correlation may not prove causation, but it tends to gesture in causation’s direction and say “hey look, over there, you might want to pick up the rocks and see what’s under them.”

I’m not saying Andre Berto is on steroids. But I’m also not saying he’s not on them. Should this fight be re-made, if I were in Victor Ortiz’s camp, I’d be insisting on WADA-style testing as a condition of making that fight and watching very closely Berto’s reaction to a more stringent drug testing regime. Andre Berto put Victor Ortiz on the floor twice in their first fight. He also tasted the canvas twice himself in what was a legit candidate for Fight of the Year. Maybe, just maybe, Berto and Victor Conte believe that a little extra something, the flower petals in the Mighty Mouse cartoon as it were, could alter the result (and set up a potential big payday with Manny Pacquiao or Floyd Mayweather in the fall, particularly in the latter’s case as he will be out of prison and looking for a fight).

Next there is Yordanis Despaigne. I covered this already in my Friday Night Fights preview, but it bears mentioning again; Despaigne beat Edison Miranda by disqualification on FNF last year thanks entirely to the efforts of inept referee Vic Drakulich, who painted himself into a corner by giving a premature point deduction for a low blow to Miranda at the end of the second round of that fight. Despaigne then put on a performance of referee manipulation worthy of a flopping soccer player or legendary NBA flopper Vlade Divac. By the fifth round the farce was complete, and if Despaigne weren’t painfully aware of just how dangerous a bloodlusted, revenge-minded Edison Miranda can be, someone in his camp sure was. Despaigne even said he wasn’t “mentally ready” to face Miranda again. Translation: “I’m a chump, I’m a chicken, I never want to be on television again lest I get exposed.” Despaigne needs a ring nickname, and I’m gonna call him Big Bird, because he’s big and yellow.

Filling out today’s undercard is Bob Arum and Manny Pacquiao, the former a master manipulator of the pay-per-click desperation brigade, the latter the Catchweight Champion of the World. Manny Pacquiao never met a fighter he didn’t want to sucker into fighting on favorable terms in order to protect his record, Bob Arum never met an honest newsman he liked, and the two of them combined have contrived a ludicrous “legacy” at any weight higher than junior lightweight.

Kudos to Floyd Mayweather for not only not submitting to the farcical “negotiations” offered by the Pacquiao camp but even one-upping his Filipino rival by not insisting on a catchweight when fighting for the junior middleweight title against Miguel Cotto. That’s an apples-to-apples comparison; Mayweather will be a 154-pound fighter fighting against a 154-pound fighter. Pacquiao was a 145-pound fighter insisting that his opponent dry out all the way to 150 (Go sweat out a two-liter bottle of soda’s worth of fluid if you think four pounds doesn’t matter. Then try to go 12 rounds with a professional boxer. Then shut your pie hole.).

In my pound-for-pound rankings, I’ve dropped Pacquiao all the way to #3 (behind Mayweather at #1 and Juan Manuel Marquez, who I rewarded for actually beating Pacquiao, no matter what the judges said, at #2) and have seriously considered dropping him as far as fifth purely by virtue of the fact that the other two guys I’d rank ahead of him (Andre Ward and Lucian Bute) don’t manipulate the sport to get what they want, they just step into the ring and deliver dominant performances. Manny Pacquiao has skated by for too long on his marketability, but if you look at what he’s actually done in the ring, he no longer looks like an all-time great, and his Kentucky Fried Promoter (and his own subservience to the same) is a lot of the reason why. Man up, Pac. You want us to think you’re better than that, prove it.

Speaking of Ward and Bute, yes, Andre Ward won the Showtime Super Six Plus A Slew Of Replacements World Boxing Classic. This made him the WBC, WBA, and Ring Magazine champion at 168 pounds, the “undisputed” champ…no mean feat because he has still yet to fight the guy who, lest we forget, was ranked #1 (the title was vacant) by Ring Magazine when the Super Six started. If you are the “undisputed champion”, and you don’t beat the best guy, does not that other guy have as much of a dispute on your title as any man alive?

With Pacquiao-Mayweather officially a pipe dream, Ward-Bute would be the most anticipated matchup in boxing…except Ward is afraid of Bute and rightfully so. Andre Ward is a defensive fighter who can be frustrated in the ring by a guy who relentlessly comes forward and applies pressure, pursuing a strategy of overwhelming the defense by sheer brute force. Bute is a 168-pound Romanian version of a guy like (if you think he’s a great) 1987 Mike Tyson or (if you want to underrate Le Tombeur) Micky Ward or Pawel Wolak. Styles make fights and Bute’s style would be a disaster for Ward’s style. Andre Ward can fight a lower-quality pressure fighter and beat him with defense, but when both guys are masters of their respective craft?

All of this would be perfectly OK but for Andre Ward’s smug attitude in offering excuses for not fighting Lucian Bute. Ward is instead calling out Mikkel Kessler and saying Bute should fight Carl Froch (which would be a great fight, but it reeks of passing the buck). Ward is claiming Bute is not a legitimate challenger because Bute has not fought elite super middleweights, leaving aside the greater question of who the hell Bute was supposed to fight considering all the elites were tied up by their Super Six engagements.

The net result is that a guy who wants to believe he is the undisputed champion is chickening out of the one fight that would settle that very question. Someone bust out the maple syrup and the waffles, because Andre Ward has earned his place on top of them as a main dish.

Injuries happen (especially when Victor Conte’s around). Getting exposed as a chump happens. Having a promoter who cares more about exploiting a fighter than securing the fighter’s legacy happens (and Bob Arum is far from the only one guilty of such a sin). Andre Ward, however, has no excuse. Showtime needs to throw its own muscle around and force that Ward-Bute fight. We need warriors…not poultry.

Fox Doucette covers Friday Night Fights for The Boxing Tribune. His weekly column, The Southpaw, appears on Thursdays. He thinks Bute would knock Ward out in five rounds. Fan mail, hate mail, and nominations for the Pullet Surprise (say it out loud) can be sent to beatcap@gmail.com.