All Star Boxing presents a main event in the featherweight division with Puerto Rican Orlando Cruz (17-2-1, 8 KOs) facing Mexican fighter Alejandro Delgado (15-5, 7 KOs).  The undercard will feature at least seven additional bouts, one of those with Cuban heavyweight Luis Ortiz.  All fights will take place at the Palm Bay Community Center in Palm Bay, Florida.

The Puerto Rican southpaw, Cruz, had a lengthy amateur career featuring a record of 179-10 and began his professional 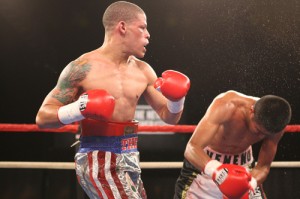 The two losses came against Daniel Ponce De Leon in 2010 and Cornelius Lock in 2009 (which was televised on the Mayweather-Marquez undercard).  Against Ponce De Leon, Cruz took a body shot in round three that resulted in a knockout loss.  Against Lock, Cruz was down in the first and fifth round, and although he beat the count, the referee called the bout at 2:08 in round five.

Delgado has gone 2-2 since 2010, with one of those losses coming against Azael Gonzalez who came into the bout with a losing record of 7-10.  This will be Delgado’s first fight outside of Mexico.

It is reported that the Telemundo Network will televise the main event at 11:35pm EST in the United States and the Televisa Deportes Network will air it at 11:00pm CST in Mexico and Central America.