Fury was set to perhaps face unbeaten prospect David Price (12-0, 10 KOs), but that seems to have gone 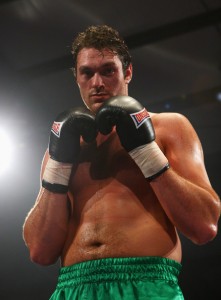 by the wayside now.  Fury’s camp insists their fighter is seeking to fight on the bigger world stage and wants nothing to distract from it.

“We have a great schedule in place for Tyson on Channel 5 and I’m not prepared to have that affected by other promoters, purse bids and titles,” said Fury’s promoter, Mick Hennessy.

Meanwhile, Price’s camp, led by promoter Frank Maloney, believes Fury’s team had no intention of putting their fighter in the ring with Price any time soon.

“We submitted our bid and crossed our fingers like all the other promoters did,” said Maloney, “but Hennessy and Chicken Fury could not take the gamble and have clucked away instead.  Fury will regret the day he gave up his belts and the chance to earn his biggest pay to date.”

Fury has been a wildly entertaining fighter in his young career.  While he is a 6’9″ behemoth, he typically mixes it up inside with his opponents far more than someone with his long reach would usually do.  This has lead him to become increasingly popular with heavyweight fight fans, but has also led many critics to believe he has hit his ceiling as a fighter.

Meanwhile, Price is considered to have the physical skills and amateur pedigree of a future world champion, yet he has not yet had the success rival Fury has enjoyed.  Interestingly enough, Price is also a physical marvel standing a whopping 6’8″ himself.

There is no word yet on possible opponents for Fury now that he has vacated his titles, but a review of the ten heavyweights ranked ahead of him by The Boxing Tribune show there are plenty of opportunities for him to climb the ladder.

Price is scheduled to take on 42-year-old Josue Blocus (16-2, 14 KO) on March 24th in Atlantic City.  It will be his first professional fight on American soil.