Junior flyweights Luis Alberto Lazarte (49-10-2, 18 KOs) and Johnriel Casimero (15-2, 9 KOs) will step in the ring to compete for the IBF interim title on Friday, February 10th.

Lazarte, also known as “El Mosquito,” comes into this bout ranked 3rd in the world among junior flyweights.  He will benefit from a large fan base as he is fighting in his hometown.  Lazarte has had losses scattered throughout his career 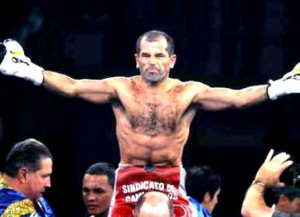 and has gone 4-1-1 since 2010.  The loss and the draw come against the same fighter, Ulises Solis, and ultimately resulted in Lazarte losing his IBF title by split decision.  His most recent wins come against Nerys Espinoza, who is now 29-8, both by way of unanimous decision.

At 21-years-old, Casimero is nineteen years his opponent’s junior.  The Filipino fighter went undefeated until 2010 when he racked up two consecutive losses, one of those against second-ranked flyweight, Moruti Mthalane.  He recorded a TKO win in his last bout, also at flyweight, when he threw a straight right simultaneously with the sound of the ending bell for the round one.

It should also be noted that Casimero lost his younger brother due to heart problems the day before he left for Argentina (reported by boxingscene.com).

The bout will take place at the Club Eleven States in Buenos Aires, Argentina, and it is reported that the event will begin at 10pm ART (8pm EST).