The fight kicks off the first of three heavyweight title fights, which will be broadcast live to the U.S. on three consecutive Saturdays, on EPIX.  As with previous cards offered on the channel, EpixHD.com will also stream the fights live as part of a special free trial offer for boxing fans.  You can sign up for a free trial with a valid email account.  Additionally, the fight 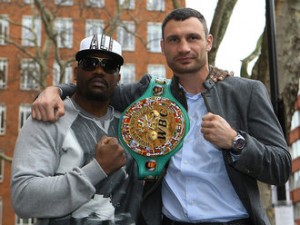 will be presented as a closed-captioned jumbotron simulcast in New York City’s famed Times Square.

Alongside his younger brother Wladimir, Vitali Klitschko has had a stranglehold on boxing’s glory division for almost a decade now.  He hasn’t lost a bout since his epic 2003 slugfest with Lennox Lewis.  Ahead on all the scorecards at the time of the stoppage, Klitschko was left pleading for the fight to continue as blood gushed down his face due to the brutal cuts inflicted on him by the defending champion Lewis.

The referee halted the contest, however, and Lewis wisely decided to retire rather than sign up for a lucrative-but-dangerous rematch.

Since then, Klitschko has hardly lost a round much less an entire bout.  After a four-year-long hiatus due to injury (which he then called retirement), Klitsckho returned to the sport in 2008 to dominate power puncher Samuel Peter for the WBC heavyweight title.  Since then, he’s reeled off a string of seven dominant victories in a row–the last being an impressive demolition of former cruiserweight champion Tomasz Adamek.

Overall, Klitsckho has won 11 consecutive fights since the bout with Lewis almost nine years ago.

Meanwhile, Zimbabwean-born British heavyweight Dereck Chisora (15-2, 9 KOs) is no stranger to conflict himself.  If it isn’t conflict inside the ring, which the raucous, aggressive fighter is apt at creating, it’s conflict outside of it, for which he seems to equally excel.

Chisora ran his record to 14-0 before losing a barnburner decision to undefeated prospect Tyson Fury–a fight he simply came into out-of-shape.  He then notched a win over a fighter with 43 losses on his record before facing unbeaten Robert Helenius in Finland.

Chisora dazzled the crowd and thoroughly dominated the action but was robbed the victory over the Finnish fighter, Helenius.  Still, he fought well enough for Klitsckho’s team to take notice, which has led him to his biggest contest to date.  A win over Klitsckho would not only garner him status as the WBC heavyweight champion, but it’d also assure him of future purses bigger than any he’s ever imagined.

And, frankly, he’d be celebrated worldwide as the man who finally dethroned a Klitsckho brother which, right or wrong, is something the boxing community at large clamors for.

As usual, the fighter with the surname Klitschko is the heavy favorite, but there are several factors which have led many to believe the fight will be more exciting than usual. First off, Chisora will bring a youthful enthusiasm to the ring Saturday that the 40-year-old Klitschko hasn’t faced much of in recent years.  At 28-years-old, Chisora will represent the youngest challenger he’s faced since 2009’s battle with Chris Arreola.

While age surely isn’t everything (see Bernard Hopkins’ continued success), one has to wonder how much longer the injury-prone Klitschko can stay elite.  Each fight past age 40 is sure to be a test, and fight fans know better than anyone how it can all seem to go at once.  Roy Jones, Jr. blasted John Ruiz to claim a heavyweight title belt in March of 2003 only to find himself, later that same year, looking more human than ever in his very next fight against Antonio Tarver, and by his next one, he was a mere mortal.

Secondly, it may very well be that heavyweight fight fans are just plain due for a good title belt tussle.  While there have been good fights in the division over the past year or so, the last time someone actually challenged either Klitschko brother once the bell sounded has been far too long.  Eventually, that kind of thing just has to happen, right?

Finally, Chisora fights like many imagine a fighter will have to fight in order to knock the crown off Vitali’s head.  Chisora is a poor man’s Joe Frazier.  At his best, he fights aggressive, bobbing his way in the pocket to take the fight to his opponent.  He’s at the top of his game when his opponent is forced to move backwards which does the double work of decreasing his opponent’s punching leverage as it increases his own.

Unfortunately for Chisora, though, conventional wisdom says that style also plays right into Klitschko’s hands.  While fight fans often get frustrated to see fighters who normally fight aggressively abandon the approach when they fight a Klitschko brother, it is almost always because in order to reach one of their chins to do some damage, one must leave himself open to the kind of incoming firepower only a hulking, 6’8” super-athlete can deliver.

But it’s the task Chisora has signed up for, and it should be an entertaining fight for however long it lasts.  In the end, Vitali Klitschko will very likely have another knock-out victory to add to his increasingly impressive ledger of wins, but heavyweight boxing fans are hopeful it will at least be as entertaining as could be.  After all, they’ve learned that it truly does take two to tango–especially when one artist is a Klitschko brother.  If Chisora comes to dance and fights his usual style, the bout will be as good as its promoters hope.  If not, it will be another easy-but-boring win for Vitali Klitschko.

Prediction: Chisora comes out fast and strong to test Vitali early, but it only serves to bring the best out of the champion.  Klitschko wins by TKO in 6, but fight fans leave the fight wanting to see more of Derek Chisora nonetheless.