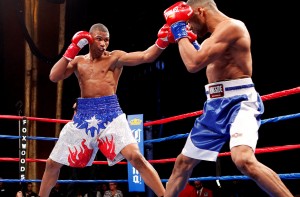 Dulorme had a big 2011 which included knockout victories over Guillermo Valdez and Harrison Cuello on the undercards of Sergio Martinez vs. Serhiy Dzinzurik and Andre Berto vs. Victor Ortiz, respectively. His best win of the year came in June, when he scored a unanimous decision victory over former 140-pound titlist DeMarcus “Chop Chop” Corley. Dulorme took a 9-round unanimous decision victory over Charlie Jose Navarro last October to close out the year.

Aris Ambriz (16-2-1, 8 KOs) was named as Dulorme’s opponent late last week after Jose Reynoso withdrew from the fight with a hip injury. Ambriz last fought in June of 2011, taking a 6-round majority decision victory over club fighter Juan Santiago. Prior to that fight, Ambriz was knocked out in 4 rounds by fast-rising Canadian prospect, Pier Olivier Cote.

In the co-feature bout, power-punching Jonathan Gonzalez (14-0, 13 KOs) takes on light-hitting journeyman Billy Lyell (24-10, 5 KOs). Gonzalez stepped up his level of competition slightly in 2011 after feasting on club fighters early in his career.  Last Summer Gonzalez knocked out Rudy Cisneros inside 7 rounds before taking out perennial stepping stone, Richard Gutierrez.

Lyell has been in with a long list of past and future champions between the jr. middleweight and middleweight divisions. He suffered losses to James Kirkland and Yory Boy Campas in 2007, Vanes Martirosyan and John Duddy in 2009, and challenged for Sebastian Sylvester’s IBF middleweight title in 2010. Lyell fought four times in 2011, with bookend losses to Julio Cesar Chavez Jr. and Dominik Britsch.