He’s a world titlist, ranked among the top 4 of the light heavyweight division and, for the most part, is an utter mystery to all but the most devout of hardcore fans.

With no drawing power to speak of, he has no leverage in making big fights happen. So, despite a title reign that hits its three-year mark in August, it will take an act of God (or HBO) to get the 30-year-old into a truly meaningful fight against 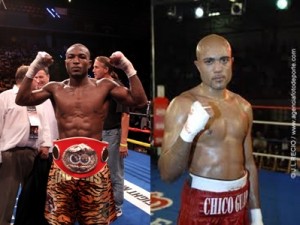 one of the three names above him on the rankings.

Americans, Bernard Hopkins and Chad Dawson (ranked #1 and #3 by The Boxing Tribune, respectively) could only muster up 40,000 sales for their mega-fail no contest debacle last October and if the WBC-mandated rematch is to be believed and enforced, the second outing should deliver even fewer paying customers than the last. Win, lose, or draw, neither fighter has been eager to call Cloud’s name and will be under no real pressure to do so with no real fan base forcing the issue.

Number two ranked Haitian-Canadian, Jean Pascal, who lost his WBC title to Hopkins and, prior to that, managed to barely keep it in an eleventh round technical decision win over Dawson, is apparently in no rush to fight anyone with a realistic chance of beating him ever again.  As arguably the biggest draw in the division, he can make money fighting hobos in his adopted home of Canada if he wants. Expect Pascal, if he ever gets a belt around his waist, to go full-out Joe Calzaghe and reap the benefits of sanctioning body canon-fodder in front of adoring and packed Canadian arenas. In other words, even an act of God may not be enough to get Pascal to take a high-risk/low reward title showdown with Cloud.

Below Cloud, WBO titlist, Nathan Cleverly from Wales, and WBA belt holder, Beibut Shumenov, from Kazakhstan, owe more to boardroom maneuverings than in-ring conquests when it comes to their championship qualifications. Between the two champions-in-training, only Shumenov actually holds a win over a Top 10 ranked light heavyweight–a very controversial, title winning, split decision win over Gabriel Campillo in 2010.

So, where does all this leave Tavoris Cloud?

The only real money fight would be against a gun-shy Jean Pascal. Legacy, career-defining fights with the likes of Hopkins and Dawson (or even Cleverly and Shumenov) don’t look to be headed his way, either.

For a fighter not getting the big fights, one would think that the promotional strategy behind Cloud would be to keep him busy and constantly in the public’s eye until something gives. Instead, the fourth best light heavyweight in the world has just been sitting around and waiting, only occasionally offering up the obligatory, “They’re ducking me” quotes to the media. Under Don King, Cloud has only fought three times since beating Clinton Woods for the vacant IBF title in August of 2009 and has pretty much fallen off the radar for many fight fans.

In terms of resume, Cloud’s best victories have come against Woods and Glen Johnson, two former world titlists a little long in the tooth, but still credible enough to be relevant contenders. Other than Woods and Johnson, Cloud’s career best wins are against “so what” fighters like Yusaf Mack, Julio Cesar Gonzalez, and Fulgencio Zuniga. Beyond that, it’s all filler fights with the usual crew of journeymen and club fighters.

So, despite the world title belt and wins over Woods and Johnson, Cloud can still be viewed as a bit of an unknown product.

He likes to be the aggressor, has solid but not devastating power, has decent balance, and, at times, has tried to adopt a rudimentary shoulder roll style. He’s also flat-footed, lacking in head movement, and has occasional lapses in concentration. As for questions of heart and soul, nobody can really be sure. The 30-year-old, 5 ft. 10 Cloud has never been pushed backwards, never badly cut, and has never had to come back from behind. With such a thin resume, there are still more questions than answers when it comes to the reigning IBF titlist.

Cloud was originally scheduled to face long-time former WBO light heavyweight titlist, Zsolt Erdei (33-0, 18 KOs) on New Year’s Eve, but the undefeated Hungarian pulled out, citing a hand injury. Erdei, who put together a string of eleven straight successful title defenses from 2004 to 2009 (albeit against mostly sub-par opposition), would’ve brought some name recognition among hardcore fans to the table.

Campillo, from Madrid, Spain, has performed well in most of his bigger fights. He took the WBA title from Hugo Garay via majority decision in Garay’s native Argentina and beat Beibut Shumenov in both of their bouts, despite only getting the decision once. On the down side, Campillo was stopped in six rounds by fringe contender, Vyacheslav Uzelkov, back in 2007 and can’t seem to get by the somewhat pedestrian, Karo Murat, dropping a 2008 majority decision to the Iraq-born German resident and then fighting him to a draw in an IBF light heavyweight title eliminator last October.

Campillo, a 6 ft. 2 southpaw, is more stylist than battler and likes to use his long reach while occasionally throwing needlessly long, looping punches. Unlike most fighters who aspire to be stylists, though, Campillo works relatively flat-footed and has only slightly above average agility. Against Shumenov, Campillo won his fair share of rounds with a surprisingly good sense of timing and a respectable ability to block incoming shots with his arms. He picked his spots well and was able to score against the defensively crude fighter, seemingly, at will.

Campillo’s problem in the Shumenov fights, as well as throughout large chunks of his nine year career, is that he never pushed to close out the show. Content with scoring and quickly setting up for defense, Campillo rarely presses the action for extended periods of time and, often, lets large parts of a fight simply slip by. Five of his last eight bouts, and all but one of his higher-profile contests, have been close calls–fighting to a draw, three majority decisions, and two split decisions. He fights smoothly and competently, but without any sense of urgency and with little bad intent.

Tavoris Cloud represents the best all-around fighter that Campillo has ever had to deal with. It would be hard to imagine the Spaniard being able to pick Cloud apart from the outside, like he did against Shumenov or being able to avoid punishment with simple arm blocks.

It’s true that Cloud, in his last two fights (against Mack and Zuniga), has not looked razor-sharp, but even a dulled-down Cloud is a tougher fight for Campillo than Murat, Garay, or even Shumenov.

Cloud’s more fluid American style will be a sticking point for the mostly straight up and down Campillo, whose timing and movement seem to throw off most of his Euro-opposition. The defending champ will not likely be confused or bothered by Campillo’s southpaw style or by his occasional stutter-steps or minimal movement.

On the surface, Cloud-Campillo looks to be a question of whether Campillo can score often enough and earn enough respect to keep Cloud from taking the fight inside. Once on the inside, Cloud will be in his comfort zone and the bout will be significantly harder for Campillo.

In order to win, the Spaniard will have to keep Cloud off balance and at the end of his long punches. He’ll also have to prove himself durable enough to take the champion’s physical style for a full twelve rounds.

On the other hand, all Cloud has to do for the win is to fight like Tavoris Cloud.

Likely too strong and too sharp for the challenger, the fight is Cloud’s to lose. A supremely focused and disciplined Campillo is capable of pulling off the upset, but only with the help of a listless, unfocused Cloud.

Strength vs. Strength, Cloud is simply the better fighter. But even a dominant performance Saturday night will just work to keep him at #4 and on the outside, looking in on a light heavyweight inner circle that seems content on going nowhere.

Tavoris Cloud (23-0, 19 KOs) vs. Gabriel Campillo (21-3-1, 8 KOs) will be televised live by Showtime from the American Bank Center in Corpus Christi, Texas along with co-feature, Paul Williams vs. Nobuhiro Ishida on Saturday, February 18th at 10 PM ET/PT.