Klitschko seemed eager for the fight and expected a great crowd on hand in Munich, where tickets are already hard to come by.

“The arena is sold out and everybody is excited to see the fight,” he said.

While most fight fans are expecting another blow-out victory for the champion, Klitschko remained respectful of his opponent.

“Don’t underestimate Chisora,” he said.  “He’s young, very aggressive and hungry.  I was very impressed with his last 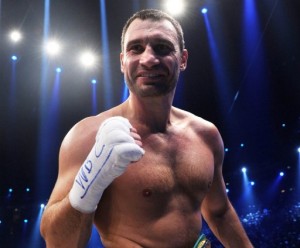 Like almost anyone who witnessed it, except the actual judges, Klitschko felt Chisora dominated the bout against Helenius even though he took the loss on a bogus decision.

“I try to find fighters with good skills who are tough.  Young guys [like Chisora] don’t have big names but have good skills.  I am more than sure the fight will be very, very interesting.”

When asked about the prospect of facing his brother Wladimir, Klitschko was candid and honest.

“To be honest, I have developed my skills by myself. My brother has big talent in boxing and in sport.  I don’t want to fight him because…he is much more talented and right now he is much younger than me—almost 5 years.   The one thing I dominate [between us] is chess.   It would be great fight, but we promised our mom and I love my brother so much so that’s why it won’t happen.  So I am sorry to all the boxing fans [who were hoping for the fight].”

So, who is Vitali set to face should he get past Chisora?

The two most prominent names that have surfaced are trash-talking Englishman David Haye and rededicated American Chris Arreola.  While Klitschko said he would be interested in fighting either challenger, it is no secret the champ would prefer a bout against Haye.

“I hope David Haye will make a decision to fight me,” Klitschko said.

No matter who he fights next though, don’t tell Vitali Klitschko there’s a crisis in today’s heavyweight division, because he’s just not buying it.

“The name of the crisis?  Klitschko brothers…because nobody can beat us.”

WBC heavyweight champion Vitali Klitschko (43-2, 40 KOs) faces world-rated contender Dereck Chisora (15-2, 9 KOs) Saturday in Munich, Germany on EPIX. As with previous cards offered on the channel, EpixHD.com will also stream the fights live as part of a special free trial offer for boxing fans. You can sign up for a free trial with a valid email account. Additionally, the fight will be presented as a closed-captioned jumbotron simulcast in New York City’s famed Times Square.