What is a Hall of Famer? You name the sport, you’ll get dozens of people with dozens of opinions about the criteria for enshrinement in their sport’s hallowed halls of immortality. Do championships matter? If so, Dick Butkus never appeared in a playoff game during his career with some truly awful Bears teams in the 1970s, but he is correctly considered one of the greatest linebackers of all time. If championships matter, where is Robert Horry in the NBA Hall? For a decade post-Jordan, the guy was the most feared player on the court with a margin of two points or less and ten seconds to play. Does sustained good-but-not-great play make a difference? The guys arguing for Jim Kaat and Tommy John in the baseball Hall seem to like that argument.

Or is the Hall of Fame simply that…about fame? What if you took a guy who was never a world champion, had a career arc where he was never truly dominant, but was the single most entertaining fighter ever to lace up the gloves? Is he a 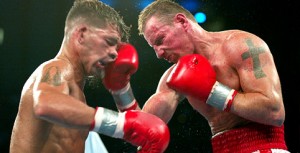 Hall of Famer? If so, why is Micky Ward not in Canastota?

Micky Ward never won a world title. He fought for one exactly once; Vince Phillips knocked Ward out in three rounds for the IBF strap at junior welterweight in 1999. Sustained good-but-not-great excellence doesn’t really apply to the Lowell native either, since he lost to an array of nobodies in the late 1980s and early ’90s, got chased into retirement for three years, then clawed his way back to contention and started losing to the best guys again. So far, that’s two strikes against Ward’s case for Canastota.

But there is one glorious front on which Micky Ward excels; no other fighter, not even Ali, could make Fight of the Year-quality contests year in, year out, fight in, fight out, as could Micky Ward. For three years in a row, Ring Magazine awarded that very accolade to a Ward fight. First in 2001 against Emanuel Augustus, then in 2002 and ’03 for the first and third fights with Arturo Gatti. Were it not for the epic war between Marco Antonio Barrera and Erik Morales (which Larry Merchant referenced during the fight), Ward might’ve taken the award four years in a row if you include his fight with Shea Neary. Even when a Ward fight ran the risk of getting boring due to Micky being outclassed, one punch could wipe out the entire fight previous to that point and leave memorable greatness. Ask Alfonso Sanchez how he feels about his dominant performance in the first six rounds of his fight with Ward. Chances are, he remembers the one and only clean punch Ward landed; the vicious trademark left hook to the body that ended that fight in the seventh.

There are a few hardcore guys out there who reject action and prefer to judge fighters on skill or traditional boxing ability, who care about titles, and who say the Hall of Fame should be reserved for the very best fighters across eras. To hear them tell it, there is one great champion per generation, sometimes across all seventeen weight classes from strawweight to heavyweight, and that all other men are simply filler for a weekend in upstate New York. They gnash their teeth when guys like Kostya Tszyu get in, they shout down anyone making a case for Naseem Hamed, some of ’em even say that Mayweather and Pacquiao shouldn’t get in until and unless they fight each other.

But riddle me this. If boxing isn’t first and foremost about entertainment, then why the hell is Sylvester Stallone enshrined in the Hall of Fame? If sustained dominance is so important, then why is Marc “Too Sharp” Johnson getting in when he never beat anyone who made you say “that was a Hall of Fame performance,” and the only time he did get a chance to do that for his legacy Rafael Marquez beat him twice? And if titles matter, then why isn’t Prince Naseem Hamed, who held the IBF featherweight strap for six years and defended it 15 times against an array of hand-picked with the WBO’s blessing “mandatory” and who-the-hell-is-he “optional” challengers getting more traction as a Hall candidate? For gods’ sake, Micky Ward had an Academy Award-winning film (The Fighter) and a punk-rock anthem (“Warrior’s Code” by the Dropkick Murphys) done about him. That’s not “fame,” as in “Hall of…”?

A hall of fame should be exactly that. A hall (or room, or museum, or broom closet) in which famous people in whatever is being honored should be pointed out to future generations as an example of what made the sport or whatever (rock n’ roll, for example) great and what future competitors or artists should aspire to. Micky Ward is the greatest pure action fighter ever to lace up the gloves. He is the prime exemplar of everything that is great about the sport of boxing, the visceral experience of two men standing in a 20-foot square space and trying to decapitate each other with their fists. It is downright criminal that he is not enshrined in the International Boxing Hall of Fame. He retired in 2003, almost nine years ago. 2013 will be his sixth year of eligibility. If he is not in Canastota, New York as an honoree next year, the sport, and the people who write about it, will have some explaining to do.

Fox Doucette covers Friday Night Fights for The Boxing Tribune. His weekly column, The Southpaw, appears on Thursdays. Ward-Gatti I was the greatest fight he has ever seen and probably will ever see. Fan mail, hate mail, and whining from Too Sharp Johnson apologists can be sent to beatcap@gmail.com.