CORPUS CHRISTI — On Friday, at the official weigh-in for the fight, Tavoris Cloud (24-0, 19 KOs) went back and forth between pacing around like a caged animal and trying to contain himself to one place sitting on a chair.  He wore a scowl and emitted the kind of guttural noises one would expect from a man that fights the way he does.  He didn’t want to be at the weigh-in.  Not even his friends and family, who sat next to him, talked all that much to him. 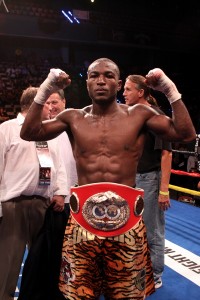 Cloud was ready to fight.

It wasn’t the big-named opponent Cloud wanted or even probably deserved, but former titlist Gabriel Campillo (21-4-1, 8 KOs) would do for now–not that Cloud had to be all that happy about it.

By the end of the fight, though, it was Campillo and the crowd in Corpus Chisti that were unhappy.   Cloud stayed just busy enough, in the eyes of the ringside judges, to bring home a split decision victory.  Judges David Robinson and Joel Elizondo had Cloud winning 116-110 and 114-112, while Dennis Nelson scored the fight 115-111 for Campillo.

The fight started off with a bang.

Cloud ferociously knocked down Campillo in the first and had him staggered again later in the round.  Campillo’s limited success in the second seemed only to enrage his opponent.  Cloud is the kind of fighter who snarls and comes forward when he gets hit, which he did with an almost reckless aggression that nearly ended up being his demise.

“I wanted to stay busy and be the aggressor,” he said after the fight.

Campillo utilized fancy footwork and sharp punches from long range to take the third round from the hard-charging Cloud, who by the fourth began alternating his own defensive retreats to go along with his trademark Jack Dempsey-like aggression.

Campillo did good work in round 5, even stunning the undeterred Cloud moments before the bell before the champion got in a hard hook of his own.  Round 6 saw Cloud return to his all plod forward style, as he pushed back the taller Campillo constantly to the ropes before unloading heavy handed shots to his head, body, arms–anything he could hit.  To Campillo’s credit, most of the punches he caught appeared to be blocked, and he’d often return some quite good fire of his own.

In round 7, the hunted became the hunter, as Campillo seemed to stop Cloud in his tracks for an extended period of the time for the first time in the fight.  In round 8, it appeared Campillo may actually drop Cloud, which again brought the determined Cloud forward in a brave attempt to turn the tide.

Campillo began taking over the fight in round 9 with his snappier punches and deft footwork.  Cloud wasn’t really able to land anything effective though he remained aggressive.  Meanwhile, Campillo was landing almost at will through both rounds 9 and 10.

By round 11, both fighters appeared to be completely worn out.  They gained a slight reprieve when the referee momentarily halted the bout to confer with the ringside doctor about a cut over Cloud’s eye, but both men were sapped for strength through the rest of the fight.

As he was being serenaded with a chorus of boos after the decision was read, Cloud explained he thought he did enough early in the fight to come out the winner.

“I feel like I won the fight.  I was the aggressor throughout.  I wanted to put him away, but sometimes you get it and sometimes you don’t.”

Campillo, like the crowd who applauded him as their chosen victor no matter the official scoring, described his loss with just one word.

The close, contested SD win may not have been exactly what he was looking for, but the unintended consequences of looking vulnerable against a skilled technician may actually get him closer to the big money fights he wants.  In the meantime, the close, highly controversial win and fervent boos from the crowd telling him they believed it should have been a loss, give him plenty of things to work on in the gym.