As the dust settles on this weekend’s melee in Munich, the morality police in the sports media have already more or less picked clean the bones of David Haye and Dereck Chisora.  Fair enough I suppose, as it’s not every day you see grown men smashing Corona bottles over each others’ heads and publicly threatening to find somebody on the streets of London and shoot them.  Before I get too upset about “another black eye for 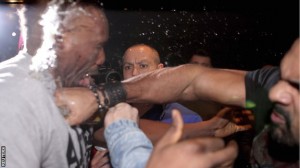 the sport” however, I gotta admit…that was sorta cool.

I know, I know, gentlemen don’t behave that way and there are a lot of people that would list stuff like that as a reason they don’t watch boxing.  As far as the latter point though, I don’t believe them.  Frankly, anybody that is that turned off by seeing a back-alley scuffle break out during a heated argument between two men probably just flat out isn’t boxing’s target demographic in the first place.

I don’t necessarily condone any of Chisora’s antics from last week; from slapping Vitali Klitschko to spitting on his brother to threatening to “physically shoot David Haye” (glad he cleared that up, by the way, as we wouldn’t want anyone to think he was only meaning to metaphorically shoot David Haye).  But I just understand that stuff like that is part of boxing.  Anybody spouting this nonsense about how back in their day fighters didn’t act this way needs to have their memory jogged.  Brawls breaking out before and after major fights is a tale as old as time in the sweet science, and for very obvious reasons.  Namely, a lot of the guys that make up the world’s elite fighters are simply violent people.

Now, of course, fans have every right to celebrate the gentlemen of the sport.  After all, who didn’t like Alexis Arguello?  The Klitschko brothers themselves obviously have quite a bit of discipline and self-control.  These attributes not only keep them on the sidelines during episodes like we saw Saturday but are also a big part of the reason they are more successful athletes than Haye or Chisora.  However, it is not an easy thing to be able to hurt people for a living and just shut that off the second you leave the squared circle.  It is simply part of being a boxing fan to understand that for every Lennox Lewis there is a Mike Tyson.

Lost in all of the controversy in Germany, was fellow heavyweight contender Cristobal Arreola being his normally profane self in his post-fight interview on the Paul Williams-Nobuhiro Ishida undercard.  After he knocked his opponent silly in the first round (and standing over him shouting during the count like “The Greatest”) fans were treated to the typically amusing experience of watching Arreola with a microphone in his face.  After making some colorful remarks about his rough childhood and his thoughts on promoter Don King, “The Nightmare” was cut off by the chief of the aforementioned morality police, Jim Gray, who said some nonsense about it being offensive or uncalled for or something.  I can’t be sure about the exact quote, I was too busy laughing to really hear him.

I don’t know if Don King is actually “racist” as Arreola said.  It is possible that Arreola’s comments were inaccurate and his language was certainly coarse, but who cares?  This is adult programming on a premium cable channel.  We just watched two massive grown men try to beat the consciousness out of each other, but somehow foul language and insults are over the line?  This certainly wasn’t the first time Gray has injected his own agenda into a post fight interview, and it needs to stop.  The fighters are the show, not the reporters.  If Chris Arreola wants to get up there and curse out everyone from Al Bernstein to Mother Teresa after a fight, more power to him.  Fans can judge for themselves if they want to approve of his comments or not without being coached on right and wrong by a broadcaster.  Say what you want about the Floyd Mayweather and Larry Merchant’s little debate last year, at least Larry let it play out without storming off with the mic.

The bottom line about all this awesome and/or classless behavior is that it has brought more excitement and attention to the heavyweight division than there has been in a long time.  Controversy sells.  We’ve seen it in boxing with everyone from Tyson to the Mayweather family.  While you or I might not approve of everything (or anything) we saw from the heavyweight contenders this weekend, it’s hard to argue that most of us want to see more of them now.  Seriously, who gave a broken glass bottle about Chisora a week ago?  Do you ever do the Google popularity experiment where you slowly type something and see how long it takes for it to come up on the auto-fill list?  I did it with “Dereck Chisora” last week and got past “Ch” without his name being on top.  Go try it now…

We now, for the first time in a while, actually have some light at the end of the giant Ukrainian tunnel.  When the dominant brothers are gone, maybe we’ll one day see Chisora and Arreola fighting for a belt.  It may not be all that classy inside the ring or out, but I promise you I wouldn’t miss it for the world.