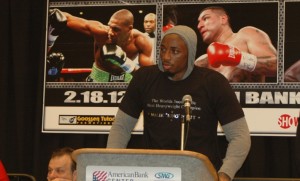 round.  He followed it with a steady diet of one-two combinations augmented by alternating a high and low guard for defense.

The next round saw Scott using a left hook, right uppercut combo with equal success.  By then, it was clear how the fight would progress.  The busier Scott was too technically sound for a hooligan like Releford, a fighter he had vanquished before.

Scott has tattoos that cover his entire upper torso, yet it was him who ended up tattooing Releford for most of the evening–which is exactly what an undefeated prospect should do against a guy with 15 losses on his record.

Still, undefeated prospects don’t always do what they should do.  Scott did, and the importance of it is likely magnified by the fact that he’s an American heavyweight.

For the most part, the fight progressed exactly like one would expect for Scott.  Instead of relying on one-punch knockout power, like many heavyweights can, Scott is forced to employ sound technical skills and a busy jab.  He lets his hands go and throws shots with thunder; he just doesn’t quite have enough lead in them to do any real damage from one or two blows.  For a fighter like him, landing in high volume is key, and that’s exactly what he did against Releford to take the win.

Scott landed a total of 181 punches in the fight with Releford only able to muster a paltry 13.

Scott appears to have enough skills to be a top ten heavyweight someday soon.  He fights smart, uses his jab and digs shots to the body with authority as often as he can.  He reflected on it after the fight.

“I believe I’m one of the best heavyweights in the world,” he said.  “The best is yet to come.”

Light heavyweight Thomas Williams Jr. improved to 7-0 with the well-earned decision win over Kentrell Claiborne (2-5, 1 KO).  Williams was quicker and appeared to have more power in his punches than Claiborne which ultimately carried him to the victory.

Julian “The Disciple” Barboza (2-0, 2 KO) did very little turning of the other cheek in his second pro fight.  Instead, the welterweight prospect from nearby San Antonio, Texas ran roughshod over Arturo Lopez, who was making his pro debut.  The fight was wisely stopped in round two as the game Lopez appeared unwilling to relent but was out on his feet.  Barboza looked focused and furious as he pelted his opponent early and often with powerful hooks and decisive uppercuts.

Corpus Chisti’s Alfonso Lopez (22-3, 17 KOs) and Justin Williams (4-5-1, 2 KOs) fought a surprisingly entertaining bout that featured back-and-forth action throughout.  Readers may recall Lopez as one half of probably the most boring ESPN Friday Night Fights main event in history last month.  Apparently, Williams saw it as well and decided to make Lopez pay for it.

Williams really seemed to enjoy it, too.  He carried to the action to the careful Lopez through the entirety of the scheduled six rounder.  In between landing flurries of punches, he’d often smile and nod at his opponent as if to let him know he didn’t just come to fight: he came to win.

Lopez appeared throughout the contest as the more technically sound of the two combatants. He pumped his jab and tried to use distance to keep his opponent at bay, but Williams used sheer, beastly aggression to get to his chin most of the night, even scoring a knockdown in round number 5.

Judges scored the fight correctly for upset minded Williams by scores of 57-56, 58-55 and 58-55.  Score one for the beleaguered Texas Boxing Commission who at least got the judging right in this one.

In the final bout before the televised Showtime co-features, lightweight Gregorio Lopez (5-1, 2 KOs) defeated Hector Garza (3-5, 2 KOs) in a scheduled four rounder.  All three judges scored the fight 39-37 for Lopez who was able to time his opponent with sharp one-two combos throughout the night.