CORPUS CHRISTI — Paul Williams (41-2, 27 KOs) earned his moniker, “The Punisher”, by throwing away his God-given height advantage, hurling a hundred punches a round and simply outlasting his opponents through sheer will.  Against Nobuhiro Ishida (24-7-2, 9 KOs), Williams did exactly that to earn a unanimous decision victory. 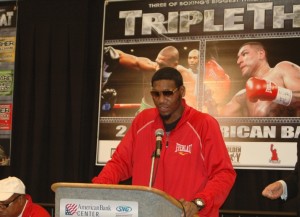 Often the subject of criticism because his fight plan doesn’t seem to fit someone with his physical attributes, Williams seemed to fight taller at times but would just as quickly revert back to the Paul Williams of old by freewheeling punches from in close at all possible angles like he’s not the taller fighter with the longer reach.  Williams confirmed afterwards there was method to the madness.

It did appear to be a work-in-progress for him, but he did it well enough to win virtually every round against a tough opponent.  Ishida was able to get in some good shots at times, but Williams simply threw way too many punches for it to really matter.

It is said that you can’t teach an old dog new tricks, but it may be that you don’t even really need to.  Like old dogs, established boxers got to where they are in the sport with the tricks they have.  That doesn’t mean Williams should stop trying to improve.  It just means he has to be who he is, and tonight he was plenty good enough.

Because of his height and reach, Williams is often unfairly compared to legendary champion Thomas “The Hitman” Hearns.  While they enjoy similar physical dimensions, neither of them possesses the same style, or even should.  Williams is good when he stays busy and even better when he alternates that with working hard from the outside like he did against Ishida.  Hearns was a boxer-puncher with a right hand full of lightning.

The bout was scored 120-108 across the board by the ringside judges.  After the fight, Williams said he was looking forward to “big fights” from here on, specifically naming Saul Alvarez, Julio Cesar Chavez Jr., and Sergio Martinez as possible opponents.