One-time featherweight world title challenger Juan Carlos Burgos (28-1, 19 KOs) takes on former IBF world featherweight titlist Cristobal Cruz (39-12-3, 23 KOs) in the main event of ESPN2’s Friday Night Fights series. Both men have stepped up one division from where they held titles; this fight will be for the WBC’s “Silver” title at junior lightweight, which in turn is, in theory, the de facto #1 contender position for the world title currently held by Takahiko Ao of Japan. In the 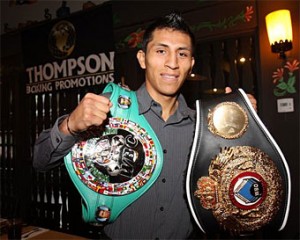 co-feature bout, distant-fringe junior welterweight Edgar Santana (26-3, 17 KOs, ranked #80 in the world by Boxrec and unranked by all major sanctioning bodies and the Boxing Tribune) gets tomato can Manuel Perez (16-7-1, 4 KOs) as his designated punching bag for a TV appearance to round out the televised action.

The main event promises to be an all-action Mexican slugfest between two very good fighters. Juan Carlos Burgos was on the fast track to greatness at 126 pounds, having beaten all in his way in his first 25 pro fights, 18 of which he won by knockout. In November of 2010, just a month away from his 23rd birthday, Burgos got a title shot against WBC featherweight champion Hozumi Hasegawa, who dealt the Mexican his first loss as a professional via unanimous decision in Hasegawa’s backyard.

Burgos quickly recovered; three months later he was on Friday Night Fights against a severely overmatched Frankie Archuleta, whom Burgos dispatched in only two rounds in front of a US television audience. Since that fight, Burgos has beaten both Gilberto Sanchez Leon and previously-unbeaten Luis Cruz, the latter on the undercard of the Pacquiao-Marquez pay-per-view three months ago. The WBC awarded Burgos a minor title at junior featherweight for his efforts, signaling that Jose Sulaiman has again found a Mexican contender for one of his world title belts.

Cristobal Cruz may very well be the second-toughest opponent (behind Hasegawa) that Burgos has ever faced. Cruz has twelve losses, but he did hold the IBF featherweight title and defended it three times (two wins and a draw) in 2009 before surrendering it to Orlando Salido, from whom Cruz originally took the belt. Against Art Hovhannisyan on FNF last August, Cruz suffered a nasty cut from a clash of heads, leading to a technical draw on the scorecards. However, Cruz is 34 years old and age may be catching up with a fighter who has been in a few wars in his day. Cruz has boxed 422 rounds in 55 pro fights (including one no-contest)–over 250 more rounds (and 26 more fights) than his opponent.

A fight like this is difficult to forecast, since both men bring that Mexican toughness and pressure style into the ring with them. Burgos has the edge in power, at least on paper, having stopped 65% of his opponents overall (and 67% of those he has defeated) to Cruz’s 41.8% (59% of his wins). In a kill-or-be-killed contest that might just make the difference.

The co-feature has the smack of a “someone had to make air” type of fight. Edgar Santana is too old (33) to be a prospect and not nearly accomplished or skilled enough to be a contender. He is, however, the heavy favorite Friday night, since as weak as his resume is, his opponent is even weaker. Manuel Perez’s only win over an undefeated fighter came against a guy who was 1-0, in Perez’s second pro fight. Perez did fight Brandon Rios to a draw in 2008, but besides that fight he has beaten awful fighters and lost to any fighter who has even a C+ level of talent.

Santana started his career 5-2 and is 21-1 since the second defeat way back in 2001. The only loss in that eleven-year stretch came in 2008 to the Human Litmus Test, Harrison Cuello, and established truly what kind of fighter Edgar Santana is. The only noteworthy opponent Santana has beaten was Josesito Lopez, not exactly Timothy Bradley or Lamont Peterson at junior welterweight. To Santana’s credit he does not fight complete nobodies; he has not fought a guy who brought a sub-.500 record into the fight since 2003, and his record is refreshingly devoid of the kind of “5-33-1, 20 losses by KO” guys you usually see in guys with artificially inflated records.

If “good but not great” is good enough to beat Manuel Perez (and given Perez’s track record, it should be), this has all the makings of Edgar Santana trying to gear up for one good run at the upper echelon before Father Time sounds the bell to end the last round of Santana’s career. ESPN will give him a chance to launch just such a bid to open the broadcast.

Friday Night Fights airs on ESPN2 and ESPN3.com on Friday, February 24th, at 9 PM Eastern, 6 PM Pacific, from Dover Downs Hotel and Casino in Dover, Delaware. The Boxing Tribune will have a full recap of the night’s televised action following the broadcast, including any swing bouts that make air.