Osvaldo Bisbal, President of the Federación Argentina de Boxeo (FAB), has had a change of heart regarding The IBF’s calls for an investigation following the events chronicled in this week’s Magno’s Monday Rant: Lazarte, Club Once Unidos, and The Lifetime Ban.

In a complete about-face, the organization head has imposed an indefinite suspension on former junior flyweight world 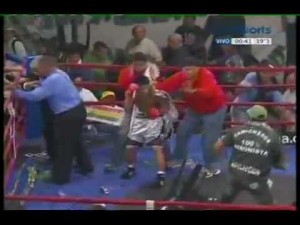 titlist, Luis Lazarte, for his conduct in issuing a mid-fight threat to the referee, Eddie Claudio, as well as his possible role in the post-fight riot following Filipino Johnriel Casimero’s stoppage of Lazarte on February 10th for the interim IBF junior flyweight title.

Just days ago, Bisbal issued the following defiant statement to the national Argentine media regarding the IBF’s lifetime ban of Lazarte and the organization’s calls for discipline from the local commission:

“We laugh at the sanctions of the international organizations. They have no jurisdiction over us. As far as I’m concerned, there’s nobody to punish for what happened.”

Bisbal also sent a letter to the Games and Amusements Board of the Philippines, expressing his regret at the actions of “a few delinquent people who have stained Argentine boxing” and affirming that an internal investigation is already in motion to punish the appropriate guilty parties.

“We are deeply sorry for all that happened to the Philippine delegation,” Bisbal wrote, “[The Philippines] is a nation close to us and where we have several friends and feel deep fondness.”

In an odd addition to the letter of apology, The FAB President also stated that his board had been hesitant to approve the Casimero-Lazarte bout because of the potential for problems, but had given the green light after the IBF and the local promoter had already signed the bout and made all the arrangements.

A possible reason for the change in attitude from Bisbal is the sudden awareness that a national commission which allows threats and violence against foreign fighters and officials to go unpunished will likely have a tough time attracting major prize fights.