St. Louis native, Devon Alexander “The Great” (22-1, 13 KOs), will take on Marcos “El Chino” Maidana (31-2, 28 KOs) of Buenos Aires, Argentina on Saturday, February 25 on HBO’s Boxing After Dark, in a 10-round welterweight bout to be held at the Scottrade Center in St. Louis, Missouri. 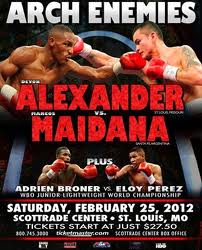 Both men, who are former jr. welterweight world titlists, will be making their welterweight debuts. Alexander, the former WBC jr. welterweight titlist, comes into Saturday’s fight after 2 subpar performances in 2011. Once thought to be one of the future stars of the sport, Alexander’s stock, which had risen dramatically following his knockout win over Juan Urango early in 2010, has been in decline since his tepid performance against Andriy Kotelnik later in the year.

Alexander suffered the first defeat of his career on the first broadcast of HBO’s 2011 calendar – the widely criticized January 29 jr. welterweight title unification with Timothy Bradley. Alexander, as shown against Kotelnik, was unable to deal with Bradley’s constant pressure and roughhouse tactics on the inside. He looked uncomfortable throughout the fight, and a cut from an accidental head butt sent the fight to the scorecards in the tenth round.

Alexander got back in the win column last June with a controversial split decision victory over Lucas Matthysse. Alexander was dropped in the fourth round, and he was hurt in the later rounds as he ran out of gas and sputtered across the finish line. Brett Miller scored the fight 96-93 in favor of Matthysse, while Dennis Nelson and Carlos Colon turned in scores of 95-94 and 96-93 in favor of Alexander. Most observers saw a close victory for Matthysse, but ringside officials saw otherwise.

While Alexander struggled mightily with the hard-hitting, aggressive Lucas Matthysse, he now faces another power-punching Argentinean. Marcos Maidana hits and charges harder than his countryman, and he will look to take Alexander out of his comfort zone.

Marcos Maidana fought most of his early career in Argentina, with a few bouts in Germany mixed in, before exploding onto the American scene in 2009 with his thrilling six-round TKO victory over Victor Ortiz, in which both men traded knockdowns. In the end it was Maidana’s heart that won out over Ortiz. The heavy-handed Maidana was handily out-boxed against Andriy Kotelnik just a few months prior to beating Ortiz, and he was meant to be a stepping stone to Ortiz’s first world title, but his victory delayed Ortiz for two years while propelling his own career.

Maidana rode the wave of fame, fighting alternating bouts in his home country and in the United States. He would go on to stop the rugged Victor Cayo with a thunderous body shot in March of 2010, but he struggled in going the distance with DeMarcus Corley a few months later.

The hard-hitting Maidana, who is never in a dull fight, has had his weaknesses and strengths on display in some of his biggest fights. His biggest weakness, which would be his tendency to trudge forward and eat punches while he launches wild shots, were exploited by Amir Khan and Erik Morales. He also lacks a commanding jab and doesn’t appear to know how to throw a punch in a straight line.

What Maidana does well is systematically, and sometimes suddenly, break down his opponents with his superior power and steel resolve. He is willing to take a few punches to land his own, and as seen several times throughout his career, he can be put down. But as seen in fire fights with Ortiz and Khan, Maidana has the grit and toughness to pull himself up and battle back.

Alexander is at his best when he fights on the outside. Like so many other high profile products of the new amateur system, Alexander has very little experience with in-fighting, and as such, he can be rattled when his opponent gets into his chest.

Should Alexander, unranked by The Boxing Tribune as a welterweight but ranked number 2 by the WBC despite zero fights in the division, win on Saturday night, he will likely put himself in place for a possible fight with WBC welterweight champion Floyd Mayweather. He would also be well-advised to go after the winner of Robert Guerrero vs. Selcuk Aydin, who according to Lem Satterfield on Ring TV, will be crowned WBC Interim welterweight titlist when they fight in June.

Maidana, unranked as a welterweight by The Boxing Tribune, will have fewer options as a welterweight and will likely find himself in the middle of the WBA’s welterweight rankings should he win. He has said that going back to the jr. welterweight division, where he holds a WBA title (Lamont Peterson is regarded as the true champion of the division), remains an option.

The contrasting styles of Alexander and Maidana open two distinct possibilities: the first being a technical domination by Alexander, the more polished, superior boxer. The second is a systematic breakdown of the slick boxer-puncher by Maidana, the crude, no-nonsense brawler. Given Alexander’s recent performances and his inability to handle sustained pressure, the latter is more likely.