Wonjongkam, a two-time WBC flyweight titlist, has an astounding 24-1-2 record in world title fights and has been a fixture on the world scene since 2001. Regarded as one of the most accomplished Thai boxers 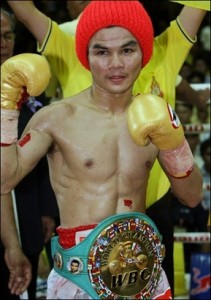 of all-time, Wonjongkam holds victories over fighters such as Edgar Sosa, Luis Lazarte, Hussein Hussein, Daisuke Naito, Julio Cesar Miranda, and Koki Kameda. In his last bout, the veteran champ had to settle for a first round technical draw against an overmatched Hirofumi Mukai (5-1-1) when a clash of heads at the 47-second mark of the bout caused a deep gash over the challenger’s eye.