Cruiserweights Ola Afolabi (18-2-3, 8 KOs) and Valery Brudov (39-3, 28 KOs) will meet in the ring to compete for the interim WBO title belt.  The bout will take place on the undercard of Wladimir Klitschko vs. Jean Marc Mormeck on Saturday, March 3rd at the Esprit Arena in Dusseldorf, Germany. 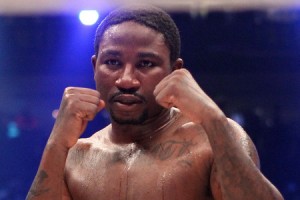 The WBO cruiserweight title belt is currently held by Marco Huck, who recently made a spirited showing in the heavyweight division against Alexander Povetkin, but came away with a majority decision loss.

Afolabi, a London native fighting by way of Los Angeles, comes into this bout ranked 15th in the world among cruiserweights.  His professional career began in 2002, though he had a three-year layoff from 2005 to 2008.   Since coming back in ’08, Afolabi has gone 7-1, with the loss coming by unanimous decision against Marco Huck in December of ’09.  Although six of his wins since 2008 have come against fighters with winning records, his most recent win was over Lukasz Rusiewicz who was 9-10 at the time.

At the age of 35, Brudov is only four years his opponent’s senior, but he has fought nearly twice the number of fights.  The Russian’s professional career began in 1999, and he’s gone 9-3 since 2006.  His most recent loss comes against ranked cruiserweight, Guillermo Jones, in 2010 by TKO 11.  Of the nine wins, only two have come against fighters with winning records.