Carl Froch, the former WBC super-middleweight champion, has been handed an early stab at redemption when he challenges Lucian Bute for the Canadian’s IBF title in Nottingham on May 26th. 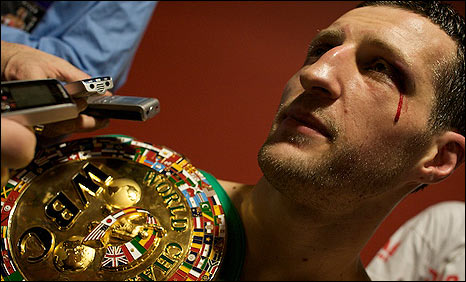 Froch, of course, was soundly beaten by Andre Ward last December in the final of the Super-Six, when he also surrendered his title. The Bute fight has been in the works for some time, and it seems that an agreement has been reached in which Froch has accepted a rematch clause which will have him travelling to Canada to defend the belt against Bute should Lucian leave his title behind in Nottingham.

Froch, 28-2, 20 KO’s, is excited by the prospect: “Bute obviously fancies the job because he’s willing to travel to Nottingham to defend the title” he told Sky Sports, “I guarantee I’ll win this fight.”

Froch is somewhat delusional, however, about the Ward fight: “It was a very close fight. I only lost by one point on two of the scorecards, so it could easily have been a draw.” Any unbiased observer of the Ward-Froch encounter would take issue with the Englishman’s reading of the contest – Ward proved himself the better man by every measure and currently stands head and shoulders above any 167-pounder on the planet.

Only Lucian Bute, 30-0, 24 KO’s, can legitimately challenge Ward’s claim. The Canadian has been IBF champion for five years and ten defences, choosing to steer clear of the Super-Six tourney and preferring to build his resume on home soil. Apart from a couple of visits to Romania and the US, Bute has stuck firmly to his home comforts, and this excursion to the UK to fight in front of Froch’s crowd will be an unusual experience for him. He remains confident: “Carl Froch belongs in the elite of the super-middleweight division and it will be a great fight. I am very confident it will not faze me fighting in enemy territory. Supporters of Carl Froch will live their greatest disappointment”, he said.

Froch-Bute should be an entertaining skirmish – Bute’s 80% knockout record and Froch’s famous steel chin guarantees a power-packed encounter that will be enhanced by feverish home-town support for the Cobra.