On Saturday night, Scottish lightweight Ricky Burns defends a title the WBO handed to him on a plate when he entertains Namibian Paulus Moses at the Braehead Arena in Glasgow. 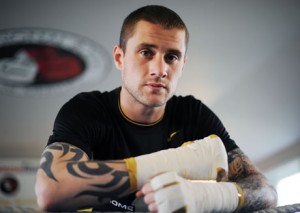 The 28-year-old Burns has risen rapidly from journeyman status to world class since upsetting the odds and taking the WBO’s super featherweight title from Roman Martinez back in 2010. His last win in November 2011 saw him decision tough Australian, Michael Katsidis, in a highly creditable performance which saw him pocket one of the WBO’s ridiculous “interim” titles. Shortly after that win, the organisation granted him the “full” gong after Juan Manuel Marquez moved out of the 135-pound division. Hence, Burns finds himself defending a title he’s never actually won.

That will matter little to his home crowd who will stack out the Braehead Arena and make it a hot night for former world champion Moses, the Namibian police officer with a solid record (28 wins, 19 inside distance, and only one loss). The 33-year-old took the WBA lightweight title from Yusuki Kobore by decision back in 2009 and defended that title once before coming unstuck against Miguel Acosta in May 2010, surrendering his title by 6th round stoppage. Moses has reeled off three victories since, against limited opposition, but looks a decent test for Burns, who has one eye on a summer block-buster with Englishman Kevin Mitchell should he come through, title intact.

Moses’ Namibian trainer, Nestor Tobias, reckons his man has all the tools to thwart Burns’ plans.

“I’ve watched Ricky’s fights with Roman Martinez, the Ghanaian [Joseph Laryea] and Michael Katsidis. He works very hard, is very busy but I’ve seen nothing that I’ll not sleep well over. Paulus has more speed and is more mature in his boxing ability. Clearly he also has more punching power. It will be a good fight and we have trained for distance. Points or knockout, we will come out on top.”

Burns, meanwhile, insists that he won’t hang up his gloves until he’s fought 100 times. At 28 and after ten years as a professional, he’s only managed 35 contests, so he will have to get a move on if he’s to realize his ambition. He sees Moses as a legitimate threat, telling Scottish newspaper The Daily Record:

“I love fighting so much. I have a good defence and as long as I’m not getting hurt I’m going to continue until I’ve had 100 fights. Others think I’m nuts but it’s all I want to do. I have to get this one out of the way. I just love fighting and the better the opponent the more I love it. I’ve always said since I started boxing at 12 that I’ll fight anyone. The only way to be the greatest is to beat the best around. This is a proper world title fight.”

Moses will be boxing in front of a rabid Scottish crowd and his forays outside his native Namibia and South Africa have been few and far between. Burns has the form and the home advantage and whilst he’s often felt to be a light puncher, he looked strong and powerful at 135 pounds against Katsidis, so I expect him to take a wide and unanimous verdict from Moses, and it wouldn’t be a surprise if he managed to overwhelm the Namibian inside distance.