As the Friday Night Fights beat writer around here, I’m committed, personally and professionally, to discharging my duties to the best of my abilities week in and week out. As a boxing fan, I’m motivated to watch the best fights between the most entertaining (not the “best,” the most entertaining, and there’s a difference I’ve hammered on repeatedly in this space best exemplified by Wladimir Klitschko and Micky Ward) fighters. For the past two months of the 2012 season of ESPN’s boxing series, these two motives have been sharply at odds with each other. 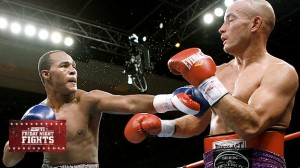 I have to wonder if ESPN isn’t just cursed this year. John Molina signs to fight in February, a guy guaranteed to put on a good show, then pulls out thinking he’ll get a bigger-money fight somewhere else and not wanting to risk his marketability. In his place, we got a 196-pound super middleweight in Shawn Estrada and a “let’s hope they don’t notice that this guy’s going nowhere” Mike Dallas Jr., both with hobos served up as opponents on a pass-the-coffee fight night.

Ruslan Provodnikov, who has never been in a bad fight in his life, did not have time for proper sparring between his win over DeMarcus Corley in December and his appearance on FNF at the end of January. He’s still never been in a bad fight in his life; to paraphrase Jerry Seinfeld, “a Provodnikov fight is like sex. Even when it’s bad, it’s still pretty good.” But what wonders might we have been so lucky as to behold had the Siberian not only come into the fight in proper shape, but also been in against his original planned opponent in Julio Diaz rather than the guy he got in David Torres? The Torres fight was a mismatch so severe that Provodnikov probably could’ve come in with two broken arms and his shoelaces tied together and still knocked his man out.

On that same card, Ji-Hoon Kim and Yakubu Amidu did the impossible; they managed to turn a surefire “fun while it lasts but someone’s getting KO’d” fight into a late-round slog that started out as a Fight of the Year-quality scrap. If you’d called your friend in the fourth round and told him to turn on his TV lest he miss something special, you’d have been left after the tenth explaining that “no, really, the first four were great.”

I committed something of a cardinal sin as a journalist in my recap that night; I called it a night of great action, which says more about the shit sandwich that had been served up for the first two episodes of FNF in January than it did about the quality of the fights on the 27th. Compared to Dyah Davis-Alfonso Lopez and Teon Kennedy-Chris Martin, Kim-Amidu was Ward-Gatti I and Provodnikov-Torres was Tyson-Spinks.

Words can hardly fit to describe how awful Davis-Lopez was. It was only through grit, determination, and an at-all-costs commitment to the quality of my work that I was able to make it through that fight without either falling asleep or saying “screw this” and turning on the PlayStation to play Fight Night instead. Don’t say I never do anything for you people. The FNF season premiere was a fine experience insofar as I get to use it in job interviews for the rest of my career as proof of my uncompromising professionalism. I’m grateful to Joe and Teddy for doing their level best to keep the viewers entertained, because the fighters sure as hell weren’t doing theirs.

The litany of great fights that weren’t continues. Edison Miranda was supposed to fight Yordanis Despaigne in a rematch of a screwjob perpetrated on Miranda by referee Vic “Count” Drakulich last year, but Despaigne punked out like a frightened child and Miranda was left to make Isaac Chilemba look good by virtue of Miranda’s spectacular ability to melt down mentally under the slightest hint of adversity (the adversity in this instance being provided by an accidental clash of heads in the third round that cut Miranda and distracted him from his game plan). Good for Isaac Chilemba, to be sure, and good for my popularity as a writer in South Africa, if the buzz on Twitter was anything to go by–not so good for fight fans other than Chilemba’s South African fan base.

Next week, Tim Coleman takes on Kendall Holt in the main event. This has all the makings of an instant classic. On the 30th, we’ve got Hank Lundy against Dannie Williams, two guys who could go ten rounds with their own shadows and make the fight a thriller. If those two matchups don’t deliver the goods, then we’d damn well better get an exorcist on call and send him to Bristol because that will be pretty damn ironclad proof that something is seriously amiss with the boxing gods. It’s quite possible that the wonderful 2011 season of FNF was a deal with the Devil and 2012 is the Devil coming around to collect.

Then again, it’s also possible that for an up-and-coming prospects show like Friday Night Fights, an Olympic year is simply a sort of holy-water font that periodically runs dry and must be refreshed by a new consecration and baptism on a quadrennial basis. Every four years, you get amateur fighters who are holding off on going pro until they have had a chance to compete in the Olympic Games; once the events in London reach a conclusion and that new blood has had a year or two to season itself in the fires of the four-rounder, those Olympians, from the US and abroad, will be in prime position to start making real runs at world titles. Just as 2011 was a great year for FNF (and, to a lesser extent, for ShoBox on Showtime), it might be 2014 or 2015 before the up-and-coming fighter shows are that good again. Yes, we’ll get some entertaining four-rounders on the swing fights in the meantime, and there will always be guys who aren’t good enough for title runs but are good enough and fun enough to watch that ESPN will give them paychecks (Provodnikov, Kim, maybe even David Lemieux if indeed the Montreal middleweight has reached his ceiling as a fighter over the past year). But transcendent, “a potential classic every single week” quality? Might have to wait a few years for that. I might write this same article again in 2016 if that’s the case.

I hope for my sake as a writer, and the sport’s sake as a marketable product on basic cable, that I’m wrong and that the past two months of rotten fights have been an unfortunate run of luck. Coleman-Holt and Lundy-Williams should be astoundingly good. That Lundy card in three weeks has as its co-feature Elvin Ayala vs. Hector Camacho Jr. in a battle of two guys David Lemieux knocked out in the first round. There’s hope for FNF yet. Pray to the boxing gods for deliverance from our long, dark night as fans.

Fox Doucette covers Friday Night Fights for The Boxing Tribune. His weekly column, The Southpaw, appears on Thursdays. Fan mail, hate mail, and March Madness brackets can be sent to beatcap@gmail.com. Free advice: if Nevada makes it as a 14-seed out of the WAC, don’t bet your life on them beating a 3. That team just ain’t any good.