**The following is part of a fictional project, all names, places, quotes, and events have been used to add realism to the simulation but have never occurred in reality.**

The Boxing Tribune, February 1st 2011 – It wasn’t easy and it wasn’t fast, but bob Arum, as he always does, managed to pull it off.  Call it luck, call it connections, call it plain old nose to the grindstone work but after years of laboring over the issue, Edwin Valero has been cleared and licensed to fight in the United States.  A date and opponent have yet to be announced, but it will be a big coming out party for the undefeated fighter.  His last bout in the U.S. was back in 2009 and prior to that, was in 2003.  The fans don’t know what they’ve been missing. 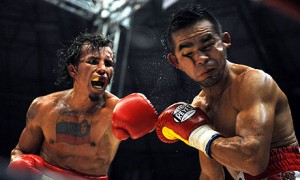 Inside sources tell us that that the major delay was medical testing.  Due to Valero’s head injury in a motorcycle crash years ago, the commissions in America wanted to be more than certain that Valero wasn’t facing any additional dangers in the ring.  His undefeated record and KO percentage had nothing to do with the decision.  Valero endured numerous and repeated medical testing with the use of several flow cytometry techniques, more so than possibly any other fighter before him, and so we’re told, passed with flying colors.  The entire process was kept quiet by Arum and others involved as to keep distractions and media attention to a minimum.  Now that the red tape is out of the way, all we need is an opponent.

Valero has all the tools to be a fan favorite in the States: he’s an aggressive, busy  power puncher with an almost perfect knockout ratio.  He fights every minute of every round, it’s hard not to like a guy like that.  The road to Pacquiao is still in the distance, but the opposition should improve, and we’ll see how many boxers are willing to step up now that “El Inca” can fight on their turf too.

UPDATE: Valero to face “The Magic Man” in March

It’s just been reported that Edwin Valero’s first opponent in his return to U.S. competition will be Brooklyn’s own “Magic Man”, Paulie Malignaggi.  The fight will take place on March 26th , 2011 at the Boardwalk Hall in Atlantic City, N.J. on the under card of the Yuriorkis Gamboa vs. Jorge Solis card.  As of this time there is no plan for the fight to be televised live, but no doubt Valero’s presence will get some attention.

As for Malignaggi, he’s a good pick for Valero’s AC debut. Though he lacks legitimate stopping power, he’s fast with his hands and feet and has enough tricks in his bag to frustrate Valero, at least for a few rounds.  Paulie’s also shown great heart and determination, even in the most dire situations.  He went 12 rounds with Miguel Cotto after getting his jaw broken in the second round, and also went 11 hard rounds with Ricky Hatton before his corner stopped the fight.  Malignaggi never quits so you know he’ll be in there for the long haul…or however long it lasts.

The Boxing Tribune, March 26, 2011, Atlantic City – It was a win, and it was on American soil, but that’s about the best thing you could say about Edwin Valero’s return to a U.S. boxing ring.  For Paul Malignaggi, it was the same old song.

What was supposed to be a showcase of Valero’s talents and a selling point to the American public that hasn’t yet seen him, turned out to be a 12 round thumping of Brooklyn native Paul Malignaggi at The Boardwalk Hall in Atlantic City, N.J. earlier tonight.  The bout was so one sided that even the fans were booing by mid fight and calling for a stoppage. It was so bad that it became boring.

From the opening bell Valero stalked Malignaggi, cut off the ring effectively, and landed thudding shots to the body and clean uppercuts from the outside.  Malignaggi did the best he could to keep Edwin away but he could never seem to dance far enough away to avoid Valero’s assault.  Aside from a knockdown scored in the final round by Valero, the entire bout played out the same: Malignaggi dancing and clowning, Valero moving forward and punching…hard.

In the end, Paulie managed to become only the second of 31 challengers to last the distance with Valero.  Scores of 118-110, 119-109, 116-112 gave Valero the 31st victory of his still undefeated career.  The problem is, the fight never should have made it past the sixth round.

Fans and even the fight commentators and reporters just couldn’t figure out why no one…no one… stepped in to stop the one sided affair.  As one analyst commented, “This is how guys get hurt, or worse. It’s not even a boxing match at this point.”  It was that bad.

You can’t fault either boxer.  Valero was doing his job, and if any one was expecting Paul Malignaggi to quit they should’ve known better.  There’s times where a boxers heart is just too big for his own good, and this was one of those times. Malignaggi needed to be saved from himself, but he was left hanging out to dry, or worse.

On a positive note, both boxers checked out fine during their post fight exams and both attended the post fight press conference.   The talk is still of a Pacquiao-Valero bout, a much more feasible goal now with American arenas being a reality for Valero.  Fact is however, that even without Manny Pacquiao, there’s plenty of quality opponents for Valero that would put on just as good of a fight and pose just as much of a threat.

For now, we wait…