When it comes to reaching the height of power followed by a sudden and rapid, “what the hell just happened here?” downfall, the gold standard is Julius Caesar, who on March 15, 44 BC, went from being the conquering hero of Rome to getting stabbed more times than the entire body of work of Michael Myers and Jason Voorhees combined. If that fate sounds familiar, it should; swap out knives for gloved fists and you have the career trajectories of three heavyweights from three very different eras of the sport.

Way back in 1919, Jess Willard fought Jack Dempsey for the world heavyweight crown. Willard had been a respected fighter, a champion in the eyes of some of the writers, and had held the legitimate lineal title in 1915 when he won it from Jack Johnson. Willard took a brutal beating, falling seven times in the first round alone, the kind of smackdown that would be stopped in ninety seconds under today’s rules and under any of today’s referees with the possible exception of Arthur Mercante Jr. (he of the negligent homicide masquerading as the Jones-Scottland fight in 2001). To quote from the Charlotte Observer, reporting the next day, July 5, about the fight:

“To all intents and purposes, he wiped out the huge Jess Willard, favorite in the meager betting, in one round. Dempsey thought the referee had announced him winner and actually left the ring. But he was called back and the butchery continued for two rounds more when Jess, sitting in his corner, with a bewildered look on his swollen countenance failed to respond to the gong for the fourth round.”It was of no use to continue,” said the ex-champion. “My strength went from me in the first round.”

Willard would come back four years later, but his career was essentially over; a knockout of a journeyman (Floyd Johnson) followed by a career-ending loss to Luis Firpo sealed the deal. All because of a fight that could fairly be called the worst, most one-sided slaughter in the long and storied history of the sport of boxing.

Fast forward fifty years to 1967. After the WBA stripped Muhammad Ali of the world heavyweight title for his opposition to the Vietnam War, an eight-man tournament was organized in order to establish a clear successor to Ali’s crown. Thad Spencer had, to that point, not been considered a serious contender to the crown; indeed, Ernie Terrell was supposed to march through the Portland, Oregon native en route to bigger and better things.

Except nobody told Spencer he was in there to lose. He gave Terrell the second-worst beating of Terrell’s career (surpassed only by Muhammad Ali himself in the infamous “What’s My Name” fight) and all of a sudden the boxing press proclaimed a new favorite in the tournament and possibly a new sheriff in the heavyweight ranks. Spencer’s next opponent was the venerable Jerry Quarry, who was coming off a big win of his own against former world champ Floyd Patterson.

The fight was not close. Quarry dropped Spencer first in the fourth, again in the tenth, and finally took the TKO victory in the twelfth round when referee Jack Downey decided he’d seen enough with only three seconds left in the fight. Said Downey afterwards, “I’m no timekeeper. I couldn’t let it go another three seconds.” Indeed, Downey could have stopped the fight at several points previous and nobody today (things were different in 1967, to be sure) would have howled that it was an early stoppage.

Thad Spencer was never the same. Not only was his quest for the heavyweight title a thing of the past, Spencer would never win another fight as a pro, losing his next three by knockout and finishing his career on an 0-8-1 streak, the lone draw coming against 5-4 Charlie Reno. Considering that Ring Magazine had Spencer ranked #2 in the world before the Quarry fight, that is an epic downfall, perhaps the worst of all time.

Finally, one cannot use the words “heavyweight” and “downfall” in the same sentence without mentioning Mike Tyson. Forget all the crap that happened from the second Holyfield fight onward. If Mike Tyson were sent to prison for life, or if someone shot him after the Buster Douglas fight, the conversation would be different only insofar as nobody would talk about Tyson being crazy; the talk would be purely about him as a boxer. 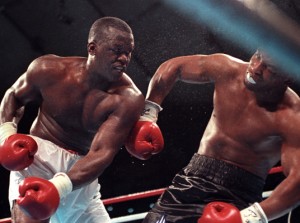 We all know the story, and those of us who were kids in the 1980s know the story better than most. Mike Tyson captured the heavyweight title at age 20, beating Trevor Berbick up so badly that Berbick couldn’t have fared any worse had he been caught in a street fight. Previous to that point, the only men who had even taken Tyson the distance were James “Quick” Tillis and Mitch Green, who ought to get medals for surviving one of the most unstoppable forces in the history of the sport.

Tyson would go on to methodically collect the remaining belts not around his waist purely to prove his own supremacy in the division. The WBC trinket was the prize for smashing Berbick; Tyson would then grab the WBA crown from the questionably named James “Bonecrusher” Smith, whose only bones crushed were his own in twelve dreadful rounds where Smith, fearful of Tyson’s power, turned the fight into an ugly spectacle rather than take his medicine like a man.

The defense against Pinklon Thomas in his next fight spoke to Tyson’s temperament (and gave foreshadowing to the insanity that would show itself in far more darkly humorous fashion later in Tyson’s career). After demolishing Thomas en route to a sixth-round TKO, Tyson said, “Every shot was thrown with bad intentions. I was hoping he would get up so I could hit him again and keep him down.”

Tyson completed the trifecta by grabbing the IBF’s belt from Tony Tucker, running his record at that point in his career to 31-0 with 27 KOs, a record that every ’80s kid knows as the record of Mike Tyson’s animated doppleganger in the classic video game Mike Tyson’s Punch-Out! Furthermore, of the four decisions, only one of them was due to a guy legitimately making a show of it and surviving (the Tucker fight). Mike Tyson was king of the world.

All that begins must end, however. After getting millions of his dollars stolen by Don King and what was left of his innocence (such as it was considering Tyson’s street-kid upbringing and temperament) stolen from him by gold-digging Robin Givens, Tyson stepped into the ring to do the one thing consistent in his life; knock out hapless dudes foolish or brave enough to stand in front of him. In Tokyo, on February 11, 1990, Mike Tyson faced Buster Douglas.

Every boxing fan knows what happened next. As if to tell the world that the 1980s were over, a complete nobody, a journeyman, a tomato can, knocked out the Baddest Man on the Planet in ten rounds. A big-money fight with Evander Holyfield was dust. The celebrity-worshipping media had a new darling, and Mike Tyson was left to pick up the pieces.

Sure, Tyson was on his way to doing exactly that, knocking out Henry Tillman and Alex Stewart in the first round in confidence-restoring fights, then exposing Razor Ruddock as a pretender to the throne. A title shot against Holyfield seemed imminent…and then Desiree Washington happened. Game, set, match. The Holyfield fight waited another five years (the 1996 Ring Magazine Fight of the Year), but Tyson would never be a legitimate champion again (Frank Bruno and Bruce Seldon do not titleholders make no matter what the WBC or WBA had to say about it).

All that begins must end; as the sun rises, so must it set. Will the Klitschko brothers meet an epic downfall like Tyson or Spencer or Willard? Or will they march off into the sunset as kings like Rocky Marciano and Lennox Lewis? Only time will tell. But the Ides of March carries its spirit 365 days a year in the Sweet Science. Any man can be Caesar and any opponent Brutus.

Fox Doucette covers Friday Night Fights for The Boxing Tribune. His weekly column, The Southpaw, appears on Thursdays. At age 12, he felt like Buster Douglas had punched his childhood in the face on that fateful night in Tokyo. Fan mail, hate mail, and legendary tales of Great Tiger and Super Macho Man can be sent to beatcap@gmail.com.