The War of the Roses (tabloid-speak for any encounter featuring Yorks v Lancs) has drummed up quite a stir in the UK – Brook will be fighting at home and has developed a decent following there, while Matthew Hatton has taken with him a fair proportion of those fight fans who would travel to all parts of the world to cheer on his elder brother Ricky. 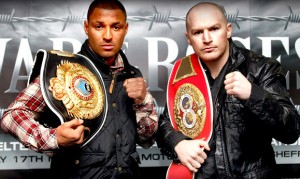 On paper, the fight should be an attractive affair – Brook, the young gun making his way in the world, against Hatton, the wizened, under-appreciated, old pro out to prove to all and sundry that he deserves some of the considerable plaudits lavished on the Hatton name these past few years.

Matthew has compiled a 42-5, 16 KO’s slate since turning pro 12 years ago. He’s spent most of his career mixing in British and European company and has held the European 147 pound title, but when he’s moved into world class, most notably in a valiant but doomed tilt at Saul Alvarez’s WBC light-middleweight belt this time last year, he’s generally found to be a little beyond his level.

That said, the Mancunian did box tough nomad Lovemore N’Dou to a draw back in 2009 when trying to annex the IBO alphabelt, and he’s only been stopped once in nearly 50 contests, and that when he was a novice back in 2003.

Kell ‘Special K’ Brook, on the other hand, has been groomed for stardom since the age of twelve when he walked into Brendan Ingle’s Sheffield gym and marvelled at the charisma and talent of Prince Naseem Hamed. It’s something of a surprise, therefore, that the 25-year-old has been a professional for eight years, remains unbeaten, but has yet to make waves on the world stage. Brook’s slow progress has been self-inflicted to a degree, with his dedication to the sport in question at various times in his career, but his talent is unquestionable. He’s 26-0, has 18 stoppage wins with 13 foes failing to hear the bell ending the third round.

So, it’s Brook’s stylish power against Hatton’s stubborn resistance. N’Dou provides something of a form guide in that he shared the spoils with Hatton in 2009, but was comprehensively outboxed and very nearly stopped by Brook in a breakthrough fight for Kell last year.

Despite Hatton’s experience and genes, it’s tough to see how he’ll live with Brook, who will out-speed and out-power Matthew. For all the hype surrounding the contest here in the UK, I take Brook to win this one at a canter, probably by a shutout points decision; but it might even be possible for him to land often and heavily enough to get a inside-the-distance-win that he’ll want in order to have people raving about him on the other side of the Atlantic.

On the undercard, Ulsterman Carl Frampton stays busy with a defence of his Commonwealth super-bantam title when he accepts the challenge of Ghanaian Prosper Ankrah. Ankrah has built an 18-2, 13 KO’s record, almost exclusively in Ghana and against lower-class opposition, and shouldn’t provide too great an obstacle for the highly-touted Frampton, who is simply marking time before mounting a challenge on other British 122-pounders Rendall Munroe and Scott Quigg.

The show also features the highly impressive Grzegor Proksa, the European middleweight champion, who is Polish but fights out of the UK as part of Barry Hearn’s stable. 27-year-old Proksa, 26-0, 19 KO’s, may well have produced the performance of 2011 when he thrashed Sebastian Sylvester in three rounds on the German’s home turf last October to win his title. He defends against 30-year-old Welshman Kerry Hope, 16-3, 1 KO, whose lack of punch dictates that he hasn’t a chance of troubling Proska beyond two or three rounds. Look for Proska to make headlines this year – he’s a massive talent.