I caught up with former WBO heavyweight titlist Siarhei Liakhovich (25-4, 16 KOs) before he was scheduled to appear on the debut of Main Events’ new boxing series on NBC Sports Network last January.  Liakhovich was scheduled to face Eddie Chambers at the time before the latter pulled out because of injury. 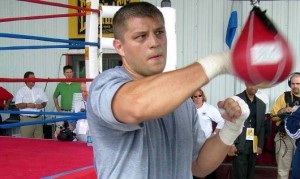 Liakhovich wasn’t pleased.  He lambasted Chambers as “fake” for pulling out just seven days before the fight which he said forced him to miss out on a payday.

The card went on as planned with heavyweight prospects Bryant Jennings and Maurice Byarm filling in.   The undefeated Jennings took home a hard-fought decision which has now led him to yet another opportunity to prove himself on the NBC Sports Network stage—this time versus the previously spurned Liakovich.

When discussing his chance to fight on American television back in January, Liakhovich was excited for the opportunity.

“I am very appreciative to NBC for the chance to fight on TV in the United States again,” he told me.

We talked at length on how he prepares for his opponents.  Liakhovich told me that he and his team used film study to prepare for his fights which is something he should have at least ten rounds of on Jennings.

“We will watch a few fights and study.  We don’t look at what [the opponent] does good.  We focus on what he is doing bad.  We want to take away his best weapons so we can take him away from his game plan.”

What Jennings does “good” is jab and keep his guard up.  He’s athletically gifted and should present a stern challenge to Liakhovich, but he doesn’t have the kind of world class experience his opponent has—at least not yet.

“It’s great experience to fight all the guys I have fought,” Liakhovich said when reflecting on a career that included fights against former titleholders Lamon Brewster (W), Shannon Briggs (L) and Nikolay Valuev (L).

Before the fight against Chambers was cancelled, Liakhovich was excited to have trainer Eddie Mustafa Muhammad in his corner for the first time.

“He was a champion and understands boxing so well,” he told me.  “He corrects my mistakes, and he’s a good coach.”

Liakhovich isn’t just aiming to make some quick cash on a TV fight.  His motivation is to once again fight for a world title, and he believes a win on NBC Sports would help open doors to bigger fights and better opportunities.

“My goal is to become world champion again,” he said.  “This is why I work so hard in the gym.”