Jan Zaveck (31-2, 18 KOs) will take on challenger Bethuel Uushona (25-1-1, 8 KOs) for a vacant minor title on Saturday, March 24th.  On the undercard, Denis Simcic will face Adam Hubinger in the light heavyweight division.  The card will take place in Maribor, Slovenia. 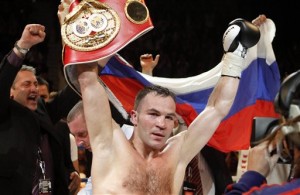 Fighting out of Slovenia, by way of Germany, Zaveck comes into this bout ranked 6th in the world among welterweights.  His first loss came in 2008, but three fights later he picked up the IBF welterweight title with a TKO win over Isaac Hlatshwayo.  He went on to successfully defend that title three times against Rodolfo Ezequiel Martinez (TKO 12), Rafal Jackiewicz (MD 12) and Paul Delgado (KO 5).  Then on September 3, 2011, he faced Andre Berto, who would serve him the second loss of his career.  Zaveck suffered cuts around both eyes and his corner stopped the bout before the start of the sixth round, despite the pleas of their fighter.

The bout on Saturday will give Zaveck the opportunity to work towards fights with top-ranked opponents, but at the age of thirty-six, the fighter’s window is closing.

Uushona will travel from Africa for this fight, something he’s only done twice in his career.  Uushona is six years his opponent’s junior and has gone 2-1-1 since 2011.  His most skilled opponent to date was Denton Vassell, who is now 19-0, and Uushona went home with a UD 12 loss.  Zaveck will, without a doubt, be his toughest opponent to date.