Southpaws Diego Magdaleno (21-0, 7 KOs) and Eduardo Lazcano (24-2, 11 KOs) will take to the ring in a nationally televised bout that will air on Showtime at 11PM ET/PT on Friday, March 23rd.  The card  will be hosted at the Casino Del Sol in Tucson, Arizona.  On the undercard, Yordenis Ugas will face Juan Garcia in the welterweight division. 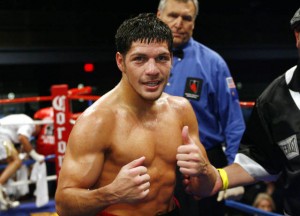 Magdaleno was originally scheduled to face Mexican fighter, and former title challenger, Miguel Beltran Jr. (26-1, 17 KOs), but Beltran pulled out of the bout.

Magdaleno was the 2007 United States Amateur Lightweight Champion and went pro later that same year.  He picked up the vacant NABF super featherweight title in January 2011 after defeating Marcos Leonardo Jimenez by TKO 5.  Since then, he has successfully defended his minor title three times against Gilberto Sanchez Leon (TKO 3), Alejandro Perez (UD 10) and Emmanuel Lucero (UD 10).  He hopes to make a fourth successful defense this Friday as he looks to continue his progression in the world super featherweight rankings—he currently stands just outside the top ten at #11.

On paper, Lazcano is similar to his opponent in many ways: both southpaws, both in their mid-twenties, both have 20+ wins.  Unfortunately, Lazcano has not remained unbeaten like his opponent.  He has two losses, one against Miguel Beltran Jr. (UD 6) in 2009 and the other against Nery Saguilan (UD 10) in 2010.  Amongst those losses, he has wins against a variety of opponents, but none with any real chops.  His two most recent wins have come against fighters with records of 0-3 and 6-7.