Britain’s heavyweight nomad, Danny Williams, continues his travels on Saturday night when he appears at the Dreifachturnhalle in Bayern, Germany in a farcical encounter with 21-year-old German, Marvin Meyer. 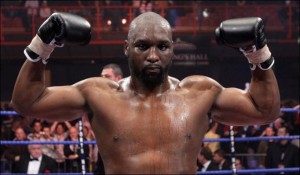 Meyer has been a professional for less than six months, during which he’s packed in three, yes, count ‘em, three contests – losing each one inside three rounds.

Williams, of course, is the guy who will always be able to dine out for free on the back of a fourth round stoppage of a shop-worn Mike Tyson back in 2004. He’s also famous in the UK for exhibiting the most astonishing feat of courage in a British ring, when he carried a dislocated collar-bone for three rounds in a British title fight with Mark Potter – eventually knocking his man out in the sixth round with his one remaining good arm. He’s also notable for a noble but bruising assault on Vitali Klitschko’s WBC title, again in 2004, when he was soundly beaten in eight rounds.

Williams, 44-11, 33 KO’s , has experienced tremendous highs and debilitating lows in his career, and had his license removed by the British Boxing Board of Control in 2010 after an abject performance in losing his British title to Dereck Chisora in a fight in which he was destroyed in two rounds and appeared as weak as a kitten. Williams promptly retired, and it seemed he’d set himself up nicely in the security business, but less than a year later he turned up on the continent and has been plying his trade as a journeyman fighter, and as fodder for a couple of European up-and-comers. Now 38 years old, Williams is all but finished as a fighter.

Williams is also pencilled in for a fight in June with one Zoltan Petranyi, the Hungarian heavyweight champ. Petranyi is 45 years old, and has been feasting on novice heavyweights these past few years. Williams has knocked him out once, back in 2005 when both fighters at least could claim a degree of relevance, but this time they’ll be contesting the vacant UBO European heavyweight title. I’m afraid I have no idea who the UBO are, and haven’t the heart to find out.

Williams’ “title challenge” will depend on him breezing past Meyer, which is sadly no formality given recent form.