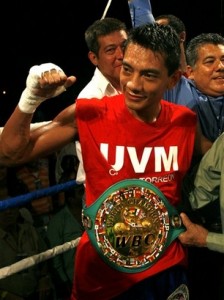 Mijares, who is making his official debut at the 122 lb. limit, fought his last two bouts at featherweight, but achieved his greatest success as a super flyweight. In his two runs as 115 lb. world titlist, the native of Gomez Palacio, Durango, Mexico, is 9-1 in world title bouts with the lone defeat coming at the hands of Vic Darchinyan in 2008.

Above the super flyweight limit, Mijares has not excelled. The 30-year-old southpaw dropped two decisions to Nehomar Cermeño in a 2009 bid for a WBA interim bantamweight title and, after briefly capturing the IBF super flyweight title belt in 2010 and vacating it one defense later, has scored back to back wins against marginal opposition at the featherweight limit.

Carbajal, a 37-year-old from Veracruz, Mexico, won his WBO bantamweight title against Mauricio Martinez in 2002 and defended it twice before dropping the belt via unanimous decision to Thailand’s Ratanachai Singwancha in 2004. The experienced battler’s best victories have come against against Jorge Lacierva and Danny Romero, but he has come up short against a long list of top fighters, including Fernando Montiel, Silence Mabuza, and Z Gorres.