Boxing is dead. Gale Van Hoy and Pierre Benoist and Jon Schorle and Bob Arum and the Klitschko brothers and the editorial staff of every boxing publication and I, Fox Doucette, your friendly neighborhood commentator, killed it. Any fisticuffs leading to profits being made from ESPN and HBO and Showtime and NBC Sports Network and any other company, entity, or snarky sportswriter should be regarded as an illusion. When you claim to see boxing matches being held in front of throngs of fans in arenas and casino ballrooms, just think of Chico Marx: “Who are you gonna believe, me or your own eyes?” That fight you see? Not happening. People aren’t punching each other in the head for money, therefore you should put the drugs away and stop hallucinating that entertainment is occurring. Boxing is dead. 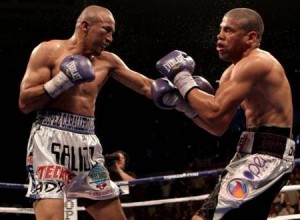 Also, pro football is dead. The NFL died when millionaires fought with billionaires over who got to keep how much of the money. The New Orleans Saints put bounties on the heads of opposing players, undermining the fundamental integrity of the game. Concussion risk means that no parents will ever allow their sons to play the sport because medical evidence shows that their brains will turn into pudding and they’ll have to redefine pugilistica dementia to read “gridironica dementia” because, as mentioned in the previous paragraph, boxing is dead. Bill Belichick spied on opposing teams, making the outcome of the 2007 season a foregone conclusion since the whole thing was just World Wrestling, and cheating was…oh, right, the New York Giants happened. I’d blocked that out of my memory. But still. Forget the record television ratings. Pay no attention to the fantasy leagues or billions of dollars in sports book take or the debates happening on Facebook and Bleacher Report and Deadspin over whether Andrew Luck or Robert Griffin III will have the better career. Tim Tebow? Just a guy praying in the grass, forget the context. You’re hallucinating on Sundays. Pro football is dead.

The NBA is dead. The lockout and LeBron James building a super team in Miami and Kevin Garnett calling Charlie Villanueva a cancer patient and Tim Donaghy and Allen Iverson’s thug life career, they all killed professional basketball. The league died when we didn’t get to hear Roundball Rock before a game because NBC lost the broadcast rights to ESPN. The Lakers have no fans anymore ever since Kobe Bryant played hide-the-salami in the ass of that chick in Colorado whether it was consensual or not. Antoine Walker’s gambling debts and Clippers owner Donald Sterling playing slum lord, it undermined the fundamental integrity of the sport and killed the game for everyone. Pay no attention to the 19% rise in local television ratings in 2012 (source: Sports Business Journal, March 4, 2012). The Blake Griffin Experience making the Clippers good for the first time in six years? Kevin Durant and Russell Westbrook not only becoming the first pair of teammates to score 40 points each in a game twice in the same season, but twice in the same career? Linsanity? All illusions. Never happened. Put the drugs away. All the excitement in roundball since the delayed start to the season is all in your mind. The NBA is dead.

College basketball is dead. John Calipari and boosters and ineligible student-athletes and that execrable Duke-Butler game last year and players going pro after only one year, the recruiting insanity of high school kids who couldn’t put two and two together and get the same answer if you asked them on separate days (you might get four one day, seven the next, five another day, “is that two with or without the foul shot?” on another), shoe companies and the AAU and everything else floating around the college game killed it. Execrable refereeing and Lehigh and Norfolk State killed it (OK, those latter two just killed my bracket this year.) Unless you went to college at one of the schools involved in the tournament, the game just doesn’t matter (and as a Nevada-Reno alum, even that’s not enough.) Never mind the $12 billion wagered on March Madness this year or the 10.3 million brackets filled out on ESPN.com and CBSSports.com combined (source: Bloomberg BusinessWeek, March 15.) Never mind the millions of dollars that the first two days of the tournament costs American business in lost worker productivity as people stream the games on the office computers via CBS’ excellent service for hoops aficionados. Forget that long road trip the Celtics had to take because their home arena hosted a regional. All that water cooler talk about who’s winning the office pool (probably the ditz in the mailroom who doesn’t know a thing about sports or anything else but just picked the teams with her favorite animals as team nicknames)? All in your head. You’re not seeing any of that stuff. It’s time to put the drugs down. College basketball is dead.

Baseball is dead. Steroids and the 1994 strike and stat nerds making the game inaccessible to casual fans and Moneyball and all the players speaking Spanish or Japanese and Keith Olbermann being all sanctimonious and Ken Burns and Bob Costas expressing nostalgia for an America gone by (all the more ironic in Olbermann’s case because he rails against politicians for expressing similar nostalgia as public policy outside of a baseball stadium), they all killed the sport. Peanuts and Cracker Jack are dead too, we’re all tearing into Extreme Doritos and freaking out over the nitrites in hot dogs that give you cancer, never mind the fact that they could probably dig my dad out of the six-foot hole he’s been in the past 25 years plus and he’d be as fresh as the day he passed from this mortal coil because the man ate so many hot dogs at baseball stadiums in his life that the preservatives probably mooted the need to embalm him. The fresh-cut grass and the labor peace and the fantasy baseball pools and Bill Simmons jawing at John “JackO” O’Connell about Joba Chamberlain on a trampoline? The gnashing of teeth and rending of garments among Phillies fans at having to endure a nightly heart attack watching Jonathan Papelbon load the bases en route to an otherwise routine save (Thanks, Phillies, for making him no longer my problem)? The daily national conversation about a great diving catch or a long, tall home run making SportsCenter? All in your head. An illusion, I assure you. Put the drugs down. Baseball is dead.

Now ask yourself this. Why are the latter four paragraphs of this week’s rant absurd while the first one is a true assessment of how the sky is falling? Gale Van Hoy and Pierre Benoist and Bob Arum and all the rest of the weasels, grifters, slimeballs, and assorted other undesirables skulking around the outside of the ring cannot kill boxing. Inept commissions and crooks can’t kill boxing. Boxing is the greatest sport in the world precisely because there is nothing better than the visceral thrill of watching two men stand toe to toe with each other and attempt to commit manslaughter with their fists until either an agreed-upon number of rounds has passed or one man has damn near accomplished his goal, bailed out only by a referee reaching the count of ten or deciding to prevent the very goal that is unstated at the fight’s outset. There is no more pure expression of the competition of will and athleticism in all of sports than a boxing match. As long as that is true, there will be someone to watch. Football and basketball and baseball will die before boxing does. And I don’t see any of those three sports going any time soon. So for love of the gods, turn the damn fights on and enjoy the action and stop yapping about how “boxing is dying”. It is a tired meme and gets more annoying every time I hear it.

Fox Doucette covers Friday Night Fights for The Boxing Tribune. His weekly column, The Southpaw, appears on Thursdays. He left hockey out of the rant because holy crap, are hockey owners ever a suicidal sort! Fan mail, hate mail, and Australians ranting about how the AFL is dying can be sent to beatcap@gmail.com.