IBF strawweight titlist, Nkosinathi Joyi (21-0, 15 KOs) defends his title against Japan’s Katsunari Takayama (24-4, 10 KOs) in a rematch of their January 2011 contest that ended in a no contest.  The Orient Theater is East London, East Cape, South Africa will play host to this 12-round title fight. 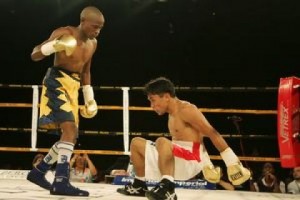 After holding the minor IBO strawweight title for two years, Joyi, a tall southpaw, defeated Florante Condes to earn a shot at Raul Garcia, the IBF Champion at the time. Joyi dominated Garcia over the course of 12 rounds to capture the title in March of 2010. His first and only title defense came last January, but ended in a no contest after an accidental clash of heads opened a cut on top of Takayama’s head. Joyi has been inactive since then.

Takayama, the former WBC strawweight titlist, has also been inactive since last January’s fight with Joyi. Aside from his title-winning effort in 2005, Takayama has come up short in his two subsequent title challenges; losing a close split decision to Yutaka Niida in 2007 and a wide decision loss to Roman “Chocalatito” Gonzalez in 2009. Friday will mark the third consecutive fight in South Africa for Takayama, who fought exclusively in Japan in his career.