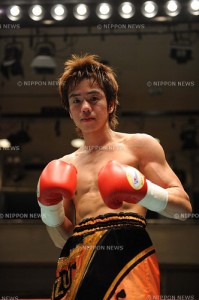 Singwancha began his professional career in 2008, and won his first regional title just two years later. After a busy 2010 that saw Singwancha collect another minor regional title, he stepped up to challenge Drian Francisco, one of the WBA’s three “titlists” at the time. Singwancha took a close decision victory over Francisco to win the WBA Interim super flyweight title last May, and was quickly promoted to World Champion just five months later. His first title defense came last December against former flyweight champion, Japan’s Daiki Kameda. Singwancha scored a unanimous decision victory to set up his unification match with Shimizu.

Shimizu has fought almost exclusively in Japan, and lost his first two world title bids; his first to Pongsaklek Wonjongkam in 2007, and his second to Daisuke Naito in 2008. Shimizu won the WBA super flyweight title from Hugo Cazares last August, three months after Singwancha won the WBA Interim super flyweight title against Drian Francisco. Shimizu suffered a fractured orbital bone in his title-winning fight against Hugo Cazares, and was moved to “Champion in Recess” to clear the way for Singwancha’s promotion to full champion.